The first monitoring was undertaken on August 22, 2008. When the farmers group visited the CETP for sampling, they observed bypass of untreated effluents and the district administration and the pollution control board was informed of the same. On the complaints of the community, the regional officer, Rajasthan State Pollution Control Board and the CETP officials rushed to the site. Samples from CETP outlets were collected and tested by the farmers in their presence under the supervision of the CSE staff. It was found that the heavy metals in CETP effluents were much higher than the effluent discharge standards specified by the pollution control Board. Arsenic and zinc were found in concentrations exceeding the effluent discharge standards.

On the same day, the farmers along with the CSE staff called upon the collector and appraised him of the sad state of CETPs. SKPSS handed over the first monitoring report to the District Collector and requested him to upgrade the CETP in such a way that it can remove the heavy metals. District Collector promised action to permanently close the bypass arrangement in the CETP and also assured that the issue of heavy metals would be dealt with seriously. 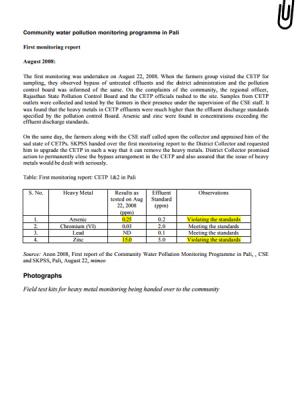