This paper is the result of a study conducted at the request of Sri Kisan Paryavaran Sangarsh Samiti, which is spear heading the cause of the farmers against the pollution ofthe Bandi river and groundwater in and around the town of Pali, by textile dyeing and printing industries. The Samiti, formed in 2004 has members drawn from around 50 villages in and around Pali.

The key issue of concern is that the textile printing and dyeing industries located in Pali town are discharging industrial effluents into the river Bandi, a non-perennial river with no flow in the lean season, thus severely contaminating both the river as well as the groundwater. There are more than eight hundred textile units in the city. Effluents from Pali flow about 55 km downstream, making the groundwater in several riverbank villages unfit for irrigation or drinking.

Pali is one of the critically polluted areas identified by the Central Pollution Control Boardin 1998. The industries here discharge a variety of chemicals, dyes, acids and alkalis besides heavy metals and other toxic compounds. Textile dyes are toxic, highly stable and do not degrade easily and are not removed by conventional waste water treatment methods.

According to a survey conducted by the Central Groundwater Board in 2004, the groundwater has turned alkaline and total dissolved solids, chloride, sulphate, sodium are very high in the groundwater rendering wells in the area unfit for drinking and even for irrigation. The soil in this area has also become hard and unfertile. In many sites heavy metals were also found. According to the Rajasthan State Pollution Control Board (RSPCB) these units discharge approximately 34 million litres per day (mld) today. Since 1983, three common effluent treatment plants (CETPs) with a capacity to treat 22.5 mld of industrial effluent have been installed at the cost of Rs 8.13 crore. There are two units located atthe Mandia road industrial area (CETP I and CETP II). These two CETPs receive waste water from the Mandia road industrial area and the 130 units located at industrial area Phase I, Phase II, Mahaveer Udyog Nagar and Maharaja Shree Umaid mill and are connected to CETP III at Punayata Road.

The CETPs are managed and maintained by the Pali Water Pollution Control Research Foundation (PWPCRF) Trust, which is one of the very first co-operative pollution control measures in the country, and initiated by the industry itself. To run these plants, a pollution cess is levied on all industries. 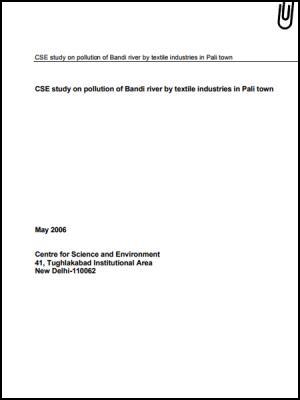