Builders face the wrath of RSPCB 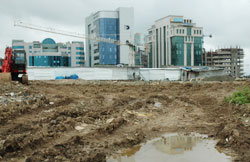 Rajasthan State Pollution Control Board (RSPCB) came harsh on as many as 53 builders for violating norms.  The builders from Jaipur failed to seek permission from the Board to construct buildings breaching the Environment Protection Act, 1986 which requires the proponent to get a go ahead from the Sate Environmental Impact Assessment Authority (SEIAA) for construction  in or more than 20,000 sq m area. Builders were issued show cause notices after SEIAA found 60 residential, commercial and institutional buildings, built without requisite permission from the RSPCB. To check the non compliance by the builders, the Urban Development Housing department also issued orders to ensure adherence to the pollution control board’s parameters for construction on land. The long and tedious method for getting consents and permission was the reason cited by builders for failing to get the permission.

According to the List of projects or activities requiring prior Environmental Clearance (EC) given in the Schedule 1 of the Environment Protection Act, 1986:-

All the projects and activities included as Category A of schedule including expansion and modernization of existing projects, change in product mix will require EC from the Central Government, in the Ministry of environment and forests on recommendations from Expert Appraisal Committee (EAC) whereas projects included in the Category B in the Schedule require prior EC from the State/Union Territory Environmental Impact Assessment Authority

“According to EIA Notification 2006 an Environmental Clearance is to be sought for any development project and the person/agency failing to do so would be persecuted under the provisions of the Act” says Shri A L Mathur, Chief Environmental Engineer, RSPCB. He further added that the builders also failed to seek Consent to Establish and Consent to Operate which are mandatory for any project  under Air (Prevention and Control of Pollution) Act 1981 and Water (Prevention and Control of Pollution) Act 1974.

If whoever fails to comply with or contravene any of the provisions under the Environment (Protection) Act, 1986, or the rules made or orders or directions issued thereunder, shall, for each such failure, be punishable with imprisonment for a term which may extend to five years with fine which may extend to Rs 1 lakh. An official said, under The Water (Prevention and Control of Pollution) Act, 1974 the defaulter can be imprisoned for a term which shall not be less than two years but which may extend up to seven years with a fine. Similarly, whoever fails to comply under the Air (Prevention and Control of Pollution) Act, 1981, will be punishable with imprisonment for not less than one year and six months but may extend to six years and with fine.