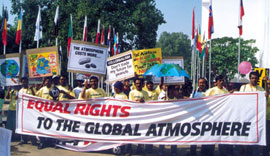 Governments from about 180 countries around the world converged in New Delhi for the Eighth Conference of Parties (CoP-8) to the United Nations Framework Convention on Climate Change (UNFCCC). Government delegates as well as representatives from inter-governmental and non-governmental organisations, media and business attending  the meet.

Kyoto Protocol gets a boost as Japan and eu ratify pact
In a move that is likely to clear the air on the intentions of key signatories, Japan and all the 15 member-states of the European Union (eu) have ratified the Kyoto Protocol. The international treaty seeks to cut the emission of greenhouse gases. Both the groups have urged the us to reconsider its decision of rejecting the protocol last year.
Read full story 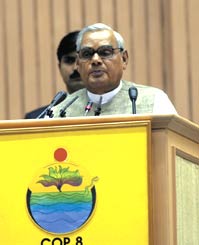 For a fortnight, 1,456 delegates from 167 countries sat in conference halls, attended plenary sessions and roundtables, and sized each other up over a cup of coffee. In the end, CoP-8 didn't witness any scintillating intellectual and moral leadership from a host that often likes to portray itself as a leader among developing nations. It could well be said that India passed over a historical moment