Bharat Aluminium Company (BALCO) is planning to set up a 4 Million Tonnes per Annum (MTPA) coal mining project and a 650 Tonnes per Hour (TPH) coal washery in Taraimar Coal Block in Mand Raigarh coal field. The project site is located in the Northern part of Mand Raigarh, near Dharamjaygarh town of Raigarh district in Chattisgarh state. The west boundary of the area is the Eastern bank of Mand River which flows nearby the project site.

The draft EIA/EMP for the proposed project has been prepared by Advance Coal Management and Marketing Private Limited (ACMM) in association with M/S Creative Engineers, Chennai.

The report is a technical evaluation of the Environmental Impact Assessment report submitted by the BALCO as part of the clearance process for the 4 MTPA coal mining project along with a 650 TPH of coal washery. About CSE Centre for Science and Environment (CSE) is an independent, public interest research and advocacy organisation, which aims to increase public awareness on science, technology, environment and development.The Centre was started in 1980. For more than two decades, CSE has been creating awareness about the environmental challenges facing our nation. 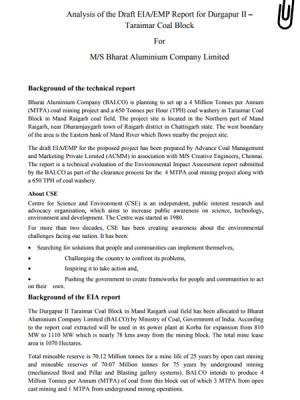