CSE’s engagement with CPWD has matured from capacity building to a long-term knowledge partnership. CSE is now a key advisor to the national institution for construction and public works for executing sustainable building practices nationwide and enabling institutional research and development.

The latest mandate for engagement was revealed in a meeting with decision making officers at CPWD, including Directors and other senior officers from across India that took place at Nirman Bhawan on 23rd August 2019. It was chaired by the Director General (CPWD), Mr. Prabhakar Singh, Additional Director General (CPWD), Mr. M.K. Sharma and CSE’s Executive Director, Ms. Anumita Roychowdhury. CSE's Programme Director, Mr. Rajneesh Sareen and around 70 officers participated in the meeting.

CSE has been training CPWD architects and engineers on several modules on low-impact design, construction, and operations and maintenance of buildings and habitat. Starting with formalisation of in-house training courses, CPWD will partner with parallel institutions on dissemination of sustainability education and establish Model Sustainability Centres. In-house training courses include green campus and operation and maintenance for the National CPWD Academy. 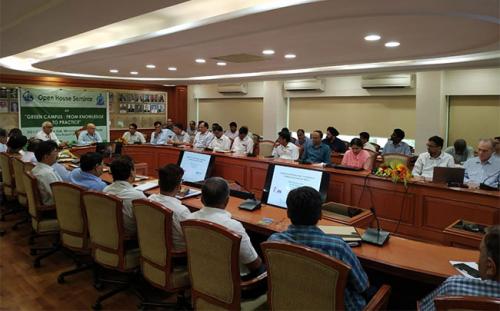 On CSE’s recommendation, CPWD constituted a dedicated Green Committee to ensure translation of knowledge into practice. The Committee meets monthly to plan and monitor pilot projects at the National CPWD Academy for demonstration-based learning. Flagship programme on greening of CPWD campuses across India will now be shaped. The process will be advocated to other parallel central institutions for adoption.

CPWD is working on greening of 100 GPRA colonies following a cabinet mandate. CSE is providing knowledge support to help shape retrofit plans and maintain colony-wise resource inventories. The engagement between the two institutions has also taken the form of a civil society campaign titled ‘My Ability for Sustainability’. This campaign will be furthered into the community for awareness and action.