The Patrakar Bhawan in Pune played host to a workshop on green architecture and energy efficiency organized by CSE on November 18. The BV Rao hall was packed to capacity and had around 50 participants.

CSE used the opportunity to express its concern over the growing obsession among the state and city governments across the country to offer sops of extra and free built up area and fiscal incentives to push the developers to opt for green rating of buildings. CSE presented an assessment which included buildings and the green rating system in Pune as well as Maharashtra. Endorsing the fiscal incentives given to green-rated buildings in Pimpri Chinchwad, Chowdhury said, “Instead of giving incentives in the form of extra built-up area, it has rightly opted only for fiscal incentives that can be withdrawn if needed. This is a better practice than giving the extra built up area as once constructed it cannot be undone if found underperforming.” 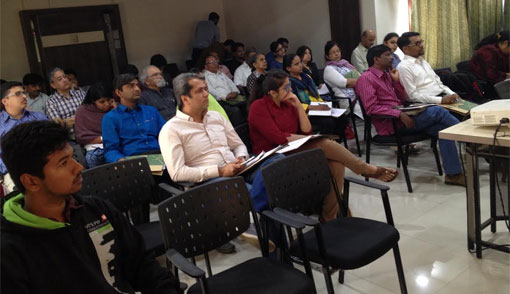 The workshop was attended by around 25 journalists from leading media houses, including Sakal, Maharashtra Times, Lokmat, The Times of India, Deccan Chronicle and Architecture Update. A few journalists started in the early hours from different locations such as Mumbai and Kolhapur to reach Pune, while one travelled overnight from Latur to attend the half-day event. One journalist remarked at the end of the workshop, “A workshop like this helps open an entire area of inquiry for a journalist.”