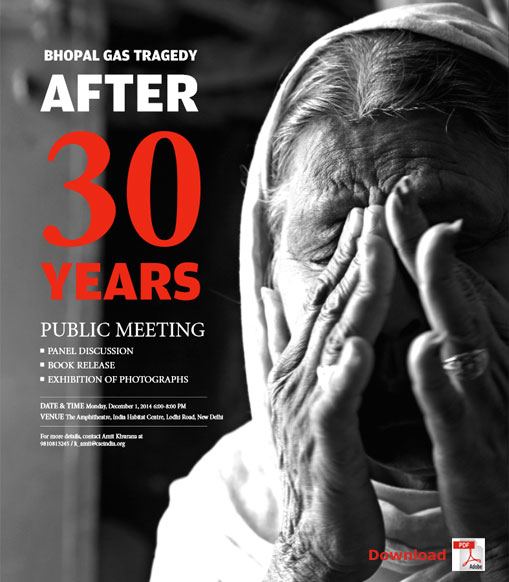 As you are aware that 2014 marks thirty years of the Bhopal gas tragedy that not only led to loss of lives in 1984 but continues to affect people in many ways. It still kills and maims thousands. The ill-effects of methyl isocyanate from the Union Carbide have passed on through generations of Bhopal people. The impact on the psyche of people including those from beyond Bhopal is still palpable. It has affected each one of us. In a certain way, it is a part of our consciousness. More so, when we realise how the aftermath of such an industrial disaster have been addressed.

It is clear that we as a nation have done too little to ensure that the victims get adequate relief, medical treatment and that Union Carbide (and now Dow Chemicals) is held liable for what happened that midnight of December 2. A few years ago CSE had tested soil and water samples from the site and found high levels of hazardous waste still present. This is the hazardous waste that the Union Carbide dumped while it was operating and has left behind to contaminate the groundwater in the city. Along with experts, we proposed an action plan to decontaminate and remediate the site but there still is a complete logjam to address this issue.

Given the state of inaction, we at CSE feel that it is imperative to recall the last thirty years, note what has gone wrong in the way the issue has been addressed and what are the lessons learnt for all stakeholders. It is also a time to talk about the way ahead – what must be done to prepare us for future years. In this regard, we are organising a public meeting that will include a panel discussion, release of our latest book and an exhibition of photographs.

The meeting is scheduled at 6:00-8:00 pm on Dec 1 at The Amphitheatre, India Habitat Centre, Lodhi Road, New Delhi. It would be an evening of sharing memories, perspective and opinion with our panel members, who are closely involved with Bhopal gas tragedy for years.

Down To Earth and CSE have been researching and reporting on the tragedy from the day it happened, chronicling every single development. To remember the ongoing struggle of the victims and for greater public dissemination of what has happened (and not), we are releasing our book ‘Bhopal Gas Tragedy: After 30 Years’ at this meeting. It not only tracks the history of the event but also reports on the latest developments. The book has articles with incisive analysis, investigative reportage based on unpublished documents, and rare photographs. Our exhibition of photographs includes a select collection on tragedy and its aftermath.
Tags: Bhopal Gas Tragedy, Union Carbide, Dow Chemicals, Groundwater, CSE Photo Exhibition,

Beyond Bhopal: incentive for unsafe industries

The chemistry of living death