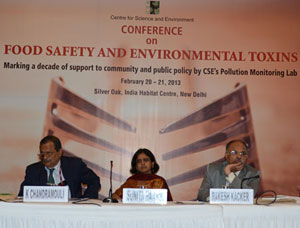 “India needs a paradigm shift in the way it manages its people’s health. It needs to move its public health policy from disease control towards prevention, focusing on water and sanitation, safe food and clean environment. In fact, the role of the ministry of health and family welfare should be recast to enable this shift:” This was one of the conclusions drawn at the end of the two-day conference on Food Safety and Environmental Toxins, organised by Centre for Science and Environment (CSE) on February 20-21, 2013 in New Delhi.

Speakers at the conference -- among whom were T Ramasami, secretary, department of science and technology; Keshav Desiraju, secretary, department of health and family welfare; K Chandramouli, chairperson, Food Safety and Standards Authority of India; Rakesh Kacker, secretary, ministry of food processing industries; and CSE director general Sunita Narain – also pointed out that “policymaking in India remains largely within the government, and there is a need to evolve a transparent process which will involve the civil society as well”.

This conference was organized to mark a decade of work by CSE’s Pollution Monitoring Lab, which has been instrumental in carrying out some seminal studies in testing for toxins in food and environment. In this context, the conference underlined the need for more such independent labs to support community struggles on pollution and health issues. The conference was attended by experts, scientists, activists and regulators from all across the country.

Most speakers were of the opinion that the government should move pesticide registration from the control of the ministry of agriculture to either health or environment, with bio-safety as the main mandate.

“There is a need to review all registered pesticides taking into account comparative risk assessment (especially for vulnerable groups like children) and deregister toxic and obsolete pesticides. We should also review and set MRLs based on ADI for all food commodities, including processed and packaged foods,” said Chandra Bhushan, CSE’s deputy director general and head of its Food Safety Programme.

The conference called for publication of an annual report on the status of pesticide contamination in the country. The process of this publication should be transparent, with participation from the civil society. It also asked for a review of what the state agricultural universities are recommending to farmers and set up systems to take strict action for prescribing illegal pesticides.

“Organic and non-pesticide farming is showing encouraging results across the country. However, the support of the governments to these practices is negligible. Subsidies should be moved away from pesticides and fertilizers towards ecologically sustainable alternatives both at the production and market ends,” says Chandra Bhushan, summarizing the conference’s key message on this issue.

The conference recognized the need for an appropriate regulatory framework to monitor junk food advertisements specifically targeted towards children. It also stressed on strengthening labeling norms specifically related to nutritional information. Speaking in the session on junk food, Sunita Narain said: “Junk food should be banned in schools.”

The tip of the toxic iceberg in Bhopal