The tip of the toxic iceberg in Bhopal 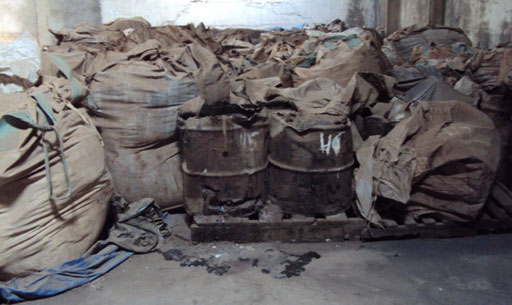 In a small non descript warehouse within the 67 acres Union Carbide factory in Bhopal lies 350 MT of hazardous waste that has been talked about in national and international media for the last eight years.

The factory is the site of the world’s wprst industrial disaster in 1984 responsible for the death of over 20,000 people and continuing illness among 150,000 survivours today. That is one reason for the heightened media attention. The other is that this relatively tiny amount of waste and the official response to it so far are emblematic of the complexity of the huge problem of hazardous waste in Bhopal and in the country as well as the lack of preparedness for their safe disposal.

This waste was collected in 2005 from different locations in the factory and while it has neither been properly characterised nor inventorised, it is known to contain high amounts of organochlorines. Accordingly, there is a higher possibility of generation of highly toxic dioxins if this waste is subjected to incineration.

Dioxins’ health effects include endocrine disruption, reproductive impairment, infertility, birth defects, impaired neurological development, damage to the kidneys, and metabolic dysfunction. There is no evidence that there is safe level of dioxins below which none of these effects will occur. As it happens, none of the hazardous waste incinerators in the country are equipped with facilities for either monitoring or capturing dioxin emissions.

In response to writ petition filed in 2004, Madhya Pradesh High Court successively directed the disposal of the 350 MT of Bhopal hazardous waste in the incinerators situated at Ankaleshwar, Gujarat, Pithampur, Madhya Pradesh and Butibori and Taloja in Maharashtra. Both Gujarat and Maharashtra have successfully opposed the Court’s directions. Most recently the Supreme Court has directed a trial run at the Pithampur incinerator, with organochlorine containing waste, as preparation for incineration of the waste from Bhopal.

With officials of the Central Pollution Control Board (CPCB) supervising the trial runs, the incinerator has failed five times (unacceptably high dioxin emissions) before its last successful run on the sixth in January this year. The Madhya Pradesh government has drawn the attention of the Supreme Court to the potential toxic exposure of the residents of village Tarpura located within 200 metres of the Pithampur incinerator. Instead of examining the unsafe location of the incinerator, the Court has directed temporary relocation of the 500 odd residents along with close monitoring of emissions by the CPCB.

Over a dozen scientific studies including the most recent by the Indian Institute of Toxicology Research have shown that the ground water as far as three kilometres from Union Carbideâ€™s abandoned factory is contaminated with toxic chemicals and heavy metals. The studies point out that the most likely sources for these contaminants are the several thousand tonnes of hazardous wastes recklessly buried within and outside the factory by the Union Carbide management during the 15-year operation of the pesticide factory.

The contamination of local ground water has resulted in chronic exposure of about 40 thousand residents of neighbourhood communities to a cocktail of toxic chemicals and heavy metals. The health impact of the toxic exposure is evident in these communities in the alarmingly high rates of birth defects and higher prevalence of diseases of the skin and gastro intestinal, reproductive, respiratory and immune systems. A comprehensive scientific assessment of the depth, spread and nature of contamination of soil and ground water is still awaited even though the problem was known way back in 1990. The work of excavation, containment and disposal of the buried waste that is likely to follow such an assessment isexpected to be financially demanding and technologically challenging. If the experience of the last 8 years with the 350 MT of stored hazwaste is anything to go by, the resolution of Bhopal’s toxic woes is unlikely to be easy.

The fact that Union Carbide’s current owner The Dow Chemical Company, held liable for the hazardous waste and contamination by the Indian government continues to evade and challenge its legal responsibility, makes anend to thisother environmental disaster in Bhopal all the more difficult.

Satinath Sarangi is a member Bhopal group for information and action