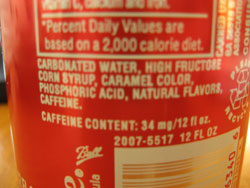 The US Food and Drug Administration (USFDA) rejected a petition filed by Corn Refiners Association to change the name of ‘High Fructose Corn Syrup (HFCS)’ to ‘corn sugar’. The petition was filed in October, 2010.

The petition was filed seeking permission to use corn sugar as a common name for high fructose corn syrup and change the name of corn sugar to dextrose. In the petition, the association claimed that HFCS fulfilled all the criteria to be renamed as corn sugar— including similar chemical composition and similar metabolism as normal sugar.

In the petition, the association had claimed that the name ‘High Fructose Corn Syrup’ was misleading for the consumers and was giving a sense that it had more calories than normal sugar. Regarding corn sugar, it claimed that consumers were more comfortable with using dextrose instead. This has been used more frequently on labels and they hardly related to ‘corn sugar’. Corn sugar, which primarily contains dextrose, has been used as common name for dextrose for last three decades in the US.

The FDA rejected the petition on two accounts. One, the term ‘sugar’ has been used for dried crystalline solid while ‘syrup’ has been used for aqueous solution. Secondly, it could mislead the people and raise public health concerns. FDA was not convinced with the argument that consumers related more to ‘dextrose’ than corn syrup. In the reply to the petition, the FDA also pointed out that corn sugar was recommended for people having hereditary fructose intolerance and mal-absorption. “Because such individuals have associated corn sugar to be an acceptable ingredient to their health when “high fructose corn syrup” is not, changing the name for HFCS to corn sugar could put these individuals at risk and pose a public health concern” added FDA in its reply.

The use of HFCS is very common in processed foods including carbonated beverages. It has been linked with many health related issues in recent years. A research at Princeton University in 2010 showed that HFCS consumption could lead to body weight gain at a faster rate compared to other sugars for same number of calories consumed. It also showed that long term consumption of HFCS could also lead to abnormal gain in body fat, especially in the abdomen.