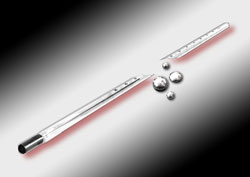 The Intergovernmental Negotiating Committee (INC) moved an inch closer to preparing a legally binding instrument to regulate mercury on a global scale. The fourth meeting was held at Punta del Este, Uruguay. The six-day meeting attended by over 500 participants began on June 27, 2012.

The meeting saw clear progress on issues like storage, waste and contaminated sites. The draft provided for parties to cooperate with each other and the relevant intergovernmental organization to enhance capacity building for environmentally sound storage of non-waste mercury and non-waste mercury compounds.

For waste management of mercury it was decided to take into account the guidelines developed under the Basel Convention. The draft article called on the parties to develop appropriate strategies for identifying and assessing sites contaminated by mercury or mercury compounds.

The INC4 narrowed down on issues related to information and reporting. The meeting has called for exchange of scientific, economic, technical and legal information concerning mercury. The draft also provides for sharing information on economically viable mercury added products, manufacturing process in which mercury is used and activities and processes that emit or release mercury.

The draft articles prepared will be laid out for discussion in INC5 that is scheduled to meet in January. Five INCs were planned ahead of the 27th session of the UN Environment Programme’s Governing Council/ Global Ministerial Environment Forum (UNEP GC/GMEF) scheduled in February 2013.

However, the discussion on the scope of the treaty— whether this instrument will be a comprehensive treaty that addresses all forms and effects of mercury pollutants or will focus on an approach that captures only the source of mercury pollution with the most significant impact—has been kept for the final round of negotiations.

Though the scope is yet to be zeroed down upon, the INC4 bound the most contentious issues in a tight knot in three substantial threads—the mechanism on implementation and compliance, provision for financial and technical assistance and transfer and range of control measures that will be included in the final treaty text.

A heavy metal and persistent in the environment, the use and the disposal of mercury has become a global concern in the last few years. The UNEP GC/GMEF has regularly discussed the need to protect human health and environment from releases of mercury and its compounds since 2001. Mercury is used in healthcare, electrical and lab instruments that pose major risk of exposure to the users (See: India’s Mercury Policy).

The World Health Organization (WHO) raised the issue of the use of mercury in dental amalgam and thimerosal in vaccines. WHO discussed the issue of vaccines with the International Pediatrics Association and noted that the alternatives to the multi-viral vaccines required refrigeration and was more expensive and hence not viable for developing countries. Calling thimerosal a “sinking ship” and access to “non-toxic vaccines” a human right, the Coalition for Mercury-Free Drugs called on the INC to take action to prevent exposure of vulnerable populations to mercury poisoning.

The World Dental Federation and the International Association for Dental Research supported the reduction of dental amalgam use. SafeMinds called for a ban on mercury use?in the health sector, particularly in the pharmaceutical and dental industries, and supported a phase-down approach. The European Lamp Companies Federation sad it is possible to limit mercury in “mainstream” lamps.

The Latin American and Caribbean Group (GRULAC) along with China, International POPs Elimination Network (IPEN) and the Zero Mercury Working Group called for inclusion of principle of common but differentiated responsibilities and the polluters pay principle.

Colombia, home to one of the most mercury contaminated sites, urged the adoption of a strong compliance mechanism and banning trade with non parties to encourage ratification. Philippines called for trade control measures that should make traders accountable and require them to include waste disposal in pricing structures. The trade in mercury containing products had nearly tripled since the INC3 held in October 2011.

Nigeria called for promotion of mercury free products and take back schemes for mercury containing products.

Zero Mercury Working Group, among other things, called for ‘ending toxic trade’ in mercury and phasing out primary mercury mining.

China highlighted the significance of financial mechanism to all developing countries. China along with Indonesia and Cuba called for independent financial mechanism. Sri Lanka stressed the importance of sound technology transfer and appropriate financial assistance.