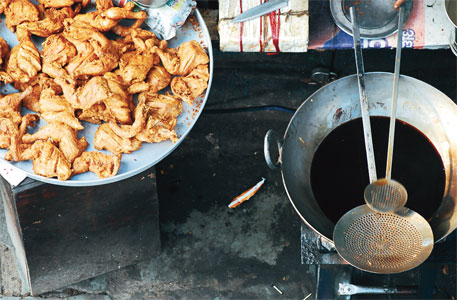 The Food Safety and Standards Act (FSSA) of 2006 has not gone down well with food business operators. The FBOs say sections of the Act dealing with licensing, registration, hygiene standards, penalty provisions and powers of food safety inspectors are “draconian”.

FSSA, which came into force in August last year, replaces the Prevention of Food Adulteration Act (PFA) of 1954. It had set one-year deadline for those engaged in food business to obtain a new license. The deadline was set to end on August 5, 2012. But considering the insufficient progress in licensing and registration in various states and protests across the country, the FSSAI extended it by six months in an order issued on July 24, 2012.

In early May, the Confederation of All India Traders (CAIT) held a conference to launch a nationwide signature campaign to address the problems pertaining to the Act. The conditions laid down in the Act are impossible to achieve by the domestic trade and commerce sectors, says Praveen Khandelwal, secretary general of CAIT. “It would endanger the local players and lay the red carpet for multinationals,” he adds.(read the full interview)

Under the Act, all food business operators with an annual turnover of more than Rs 12 lakh need to obtain a license, while the others have to get registered. According to S Rethinavelu, senior president, Tamil Nadu Chamber of Commerce and Industries, much has been left to the discretionary powers of the designated officers.

“Traders have to rely on them to get their licenses, which is tantamount to inviting corruption,” he says.

The Madras High Court stayed the implementation of some of the provisions of the Food Safety and Standards Act of 2006 in the state. Justice K Venkataraman, who was hearing a writ petition filed by the Tamil Nadu Chamber of Commerce and Industries, granted the interim order on April 26. The sections of the Act on which the stay will apply include rules on adulterated food, registration, licensing, provisions of punishment and formation of scientific panels and committees.

D V Malhan, executive secretary, All India Food Processors’ Association, however, is optimistic. “FSSA has a few problems but that happens with most of the new Acts. We are in touch with the authorities and hope they will take corrective action.”

While the National Association of Street Vendors of India (NASVI) has welcomed the Act, it has some reservations. “Registration of street vendors and small traders under the Act will help them run their businesses legally and this should be done at the earliest,” says Vinod Simon, programme manager, NASVI. The worry is that this could become a tool to harass the vendors, he says.

The deadline may not be sufficient for the big operators as well. Though CAIT could not put a number to those who will be affected by the deadline, they are demanding an extension.

Food safety commissioner of Maharashtra Mahesh Zagade, however, expects the licensing process will be completed on time. He says 160,000 food business operators have already been given licenses in Maharashtra.

Where it hurts more

There are many in the unorganized sector that will be caught in a tight spot. FSSA has made it mandatory for all types of edible oil to be sold packed, labeled and marked as per the specifications in the Act. It says no license will be issued to a manufacturer of vegetable or edible oil unless he has his own laboratory for testing samples. The Act does not explain how big the laboratory should be or what instruments it should have. FSSA thus seals the chances of survival of the unorganized edible oil industry. As per the Ministry of Food Processing Industries, about 90 per cent of the total mustard oil produced comes from the unorganized sector in the country.

The other bone of contention is hygiene. “Shops and food stalls can be kept clean just like we keep our homes clean,” says H G Koshia, food safety commissioner, Gujarat.

Though it makes perfect sense for such a provision to be introduced what is hurting the small traders and street vendors are some of the illogical and impractical demands in FSSA. For instance, the site where food is manufactured, processed or handled should be in “a sanitary place, free from filthy surroundings and shall maintain overall hygienic environment. All new units shall be set up away from environmentally polluted area”.

The condition does not define “environmentally polluted area”, but if left to interpretations it could mean a bus station, railway platform or the roadside that almost covers all the places where the street vendor could set his shop.

Then, in order to get registered, the vendors have to ensure that their utensils are cleaned and washed under “running tap water”. “We want to provide hygienic food but water supply is not in our hands and it is unlikely that we will get any support from the administration,” says Simon.

Unlike PFA, the new Act clubs misbranded, adulterated and sub-standard food under the category of adulterated. The traders say misbranding and adulteration are two different issues and should be dealt separately.For example, a juice seller uses fruits and vegetables as his raw material. These could get contaminated by pesticides and affect the final product. “The manufacturers and traders alone cannot be held responsible for it,” says Khandelwal. Similarly, if a biscuit packet has been misbranded, the manufacturers should be held accountable and not the traders. “Adulteration is a heinous crime and it cannot be treated on a par with misbranding,” adds Khandelwal.

The maximum penalty for manufacturing, storing, selling or importing misbranded and sub-standard food is Rs 3 lakh and Rs 5 lakh, respectively. “No distinction has been made between the seller and the manufacturer. It is unlikely for a trader to be aware of the quality of a packaged product he is selling,” points out Khandelwal.

FSSA states that a penalty of Rs 5 lakh would be imposed if the article sold is not of the quality demanded by the purchaser and is to his prejudice. The vendors, including temporary stall owners, will be fined up to Rs 25,000 for the same act. The vendors say the penalty is too harsh and depends on the whim of food safety inspectors.

FSSA allows manufacturers to purchase raw material from only licensed or registered vendors. This will favor middlemen and eliminate the possibility of buying directly from the farmers. “The cost of getting raw material and finished goods tested by accredited laboratories will make products costly for manufacturers vis-à-vis big industrial houses,” says Khandelwal.

Zagade has denied getting any complaint on the provisions on hygiene or punishment in Maharashtra.Down To Earth tried contacting Food Safety and Standards Authority of India (FSSAI) but did not get a clear response.

Stay in Tamil Nadu and Karnataka

Implementation of several provisions of the Act was stayed by the High Courts of Tamil Nadu and Karnataka after protests in these states. In Tamil Nadu, the stay order had come in April on a writ petition filed by Tamil Nadu Chamber of Commerce and Industries. In Karnataka, the implementation of Act was stayed in July on a petition filed by the Karnataka Pradesh Hotels and Restaurants’ Association.