1. A total number of 56 projects (above 40ha) were awarded second stage clearances, i.e. final approval from the MoEF&CC. The total extent of forest land under these 54 projects is 10416.14 Ha.

2. The highest number of approved forest diversion cases was recorded in Madhya Pradesh, where 15 projects have been granted clearance, followed by Chattisgarh and Andhra Pradesh.

3. Andhra Pradesh ranks on top in the extent of forest land approved with a total forest area of 2577.58Ha, despite a smaller number of approved projects. Part of the reason is the controversial bauxite mining project in AP, which covers an area of 1212Ha and was approved in August 2015.

4. Madhya Pradesh ranks high in the number of cases owing to the significant number of ‘forest village conversion’ projects (7). These projects refer to cases of relocation of villages from Protected Areas.

5. The number of approved projects and the extent of forest land approved to  be diverted under these projects is presented state-wise in the table and graph below: 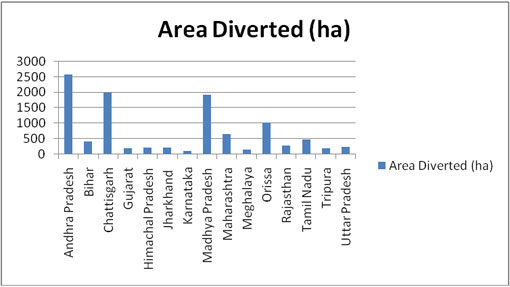 6. A sector wise analysis revealed that the mining projects were the highest to receive clearance, both in the number of cases and the extent of land approved for diversion, followed by transmission line and Road. The table and graph below provide sector wise information on forest clearance in 2015. 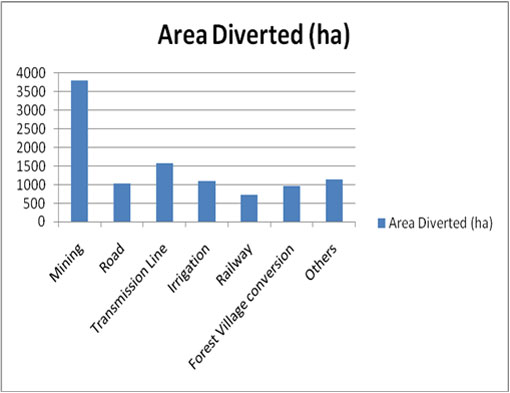 The tables and graphs below provide information on Stage 1 forest clearances, both state wise and sector wise. 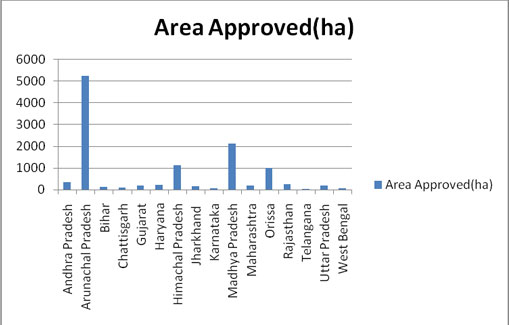 4. Once again, the mining sector recorded the highest number of cases and extent of forest land approved for diversion. The sector wise analysis of Stage 1 forest clearance above 40 Ha is provided below: 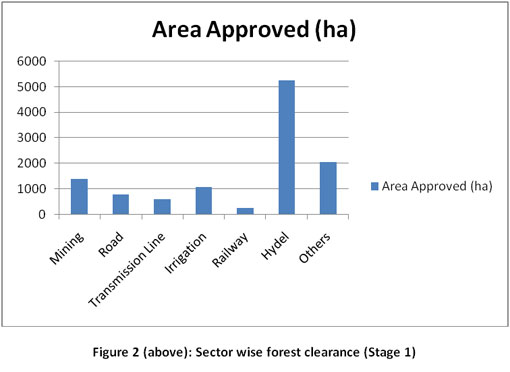 1. A lot of uproar has been created over the bauxite mining clearance in Andhra Pradesh.  Interestingly, it has taken 8 years for the project to receive the second stage clearance after it removed its ‘in principle’ approval in 2008. Ambiguities on the issuance of GO from the State Government to start mining remain.  It is important to note that the strongest resistance to mining is coming from the tribals. A careful look into the clearance letters issued by MoEF&CC has made absolutely no mention of settlement of rights of tribals or other communities who would be affected by the project.

2. The ‘Forest Village Conversion’ projects in fact, pertain to the relocation of villages from the Satpura Tiger Reserve, Hoshangabad. The Stage 1 clearance letter mentions a Rehabilitation plan to be developed as per the NTCA guidelines. The Stage 2 Clearance letter makes no mention of any such plan. No mention of settlement of rights of forest dwellers has been made in the either of the clearance letters.