Given the election season in larger part of the last quarter, and transition into a new government, the accordance of green clearances by the union Ministry of Environment and Forests has followed a relatively slow pace.

Environmental clearances for developmental projects given in the last quarter, has been primarily in the mining and the thermal power sectors. Mining projects of total 11.25 million tonnes per annum (MTPA) capacity have been cleared, among which among which more than 50 per cent was for just two coal mining projects. Three thermal power projects amounting to 1380 megawatt (MW) was cleared. Table 1 (Environmental Clearances between April and June, 2014) gives a break up of clearances granted.

In the last quarter, between the months of April to May, a total number of 67 projects were granted a final clearance for the diversion of forest land for development projects contributing to nearly 3500 hectare (ha) of forest land diversion.

During the first two months of the last quarter- April and May, clearances granted for forestland diversion have been comparatively low as compared to other months, totalling up to 24, and diverting about 2557 ha of forest land. However the grant of forest clearances paced up in the post election month of June, when 43 development projects were given a final clearance. Total forestland diversion during June was nearly 1000 ha. 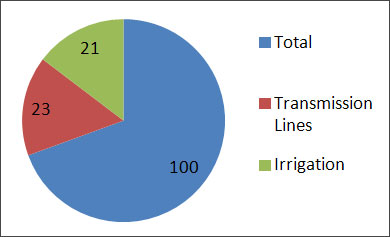