A variety of chemicals are used in cosmetics as ingredients and some are used as preservatives. These chemicals have different health effects.

Hexavallent Chromium (Cr+6) is corrosive and allergic to the skin. Cr+6 compounds are enlisted as carcinogens by the International Agency for Research on Cancer (IARC). Adverse effects of the Cr+6 on the skin may include ulcerations, dermatitis, and allergic skin reactions. Inhalation of Cr+6 compounds can result in ulceration and perforation of the mucous membranes of the nasal septum, irritation of the pharynx and larynx, asthmatic bronchitis, bronchospasms and edema. Respiratory symptoms may include coughing and wheezing, shortness of breath, and nasal itch.

Nickel can cause allergic reaction when it comes in contact with the skin. Studies on animals show that if consumed in high amounts, it affects kidneys, stomach and liver.

Mercury is used in cosmetic products such as skin whitening creams. Mercury is a neurotoxin. Mercury has been used by many names such as “mercurous chloride”, calomel, mercuric, mercurio or mercury. The prolonged use of products containing mercury can lead to inflammation of the liver, kidneys and urinary tract. Presence of mercury in Skin Creams has become a global public health problem. Mercury compounds are readily absorbed through the skin on topical application and have the tendency to accumulate in the body. They may cause allergic reactions, skin irritation or neurotoxic manifestations . Mercury intoxication from cosmetics has been featured in numerous news stories in recent years. There is evidence suggesting children who had been exposed in-utero from their mothers experienced developmental issues. These children were affected with a range of symptoms including motor difficulties, sensory problems and mental retardation .

Distribution of mercury-containing creams and soaps is banned in the European Union . A European Union Directive specifies that mercury and mercury compounds are not allowed as ingredients in cosmetics (including soaps, lotions, shampoos and skin bleaching products). However, phenyl mercuric salts for use as a preservative in eye makeup and eye makeup removal products are allowed at concentrations equal to or less than 0.007% by weight.

The California Department of Public Health (CDPH) is investigating several cases of mercury poisoning due to an unlabelled face cream from Mexico used for lightening the  skin, fading freckles and age spots, and treating acne. The cream contained very high levels of mercury: 56,000 parts per million (ppm) or 5.6%. 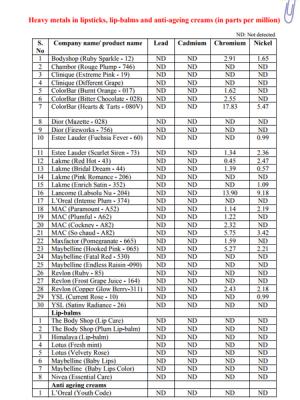