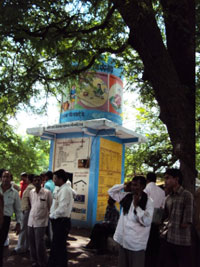 A water tank to collect all the water for the village.

“We get tap water in our houses, people in cities also do not have this facility,” beams a group of people in Didakhedi village.

Didakhedi is a small village located 13 km away from the district headquarter town of Sehore falling under the Chitodia Lakhia panchayat. The village is inhabited by 30 families mostly belonging to the OBC group of Mewadas. People depended on the 4 handpumps, which used to dry up in summer. Women and girls in the village had to walk 2-3 kms for fetching water from a open well.

Fed up of their daily struggle for water, the community approached Samarthan to help them find a solution. Samarthan facilitated a meeting of the gram sabha in 2009 so that the people can identify the problem as well as the solution. The women were vocal in their demand for a speedy solution to the water problem. The gram sabha resolved that a Village Water Sanitation Committee (VWSC) would be constituted and the village would contribute for a piped water supply in the village. The process of developing a micro-plan for water security in the village was initiated.

The village community mapped the village water resources and also put down what they would like in the village. The villagers then budgeted the costs for each of the interventions and also sources from where they would seek financial support. Each household contributed a minimum of Rs. 300/- and a total of Rs. 11,490/ was collected as contributions from the people. The panchayat chipped in with Rs. 40,000/- and Samarthan approached WaterAid India for a grant of about 2 lakh. The tank was constructed with shramdhan by the people, thus saving on the labour costs. The total cost of constructing the entire system of drilling a borewell, constructing an overhead storage tank, making the piped distribution system and the electrical connections was Rs.2.56 lakh Each household paid Rs. 1000/-for a connection to get piped water in their houses. The VWSC opened a bank account in its name so that the amounts collected for the piped water connection as well as the monthly maintenance fee of Rs. 30/- could be deposited.

An overhead tank of capacity 11,000 litres was constructed in the village and each household was provided with a tap. The source of water is a handpump bore which now supplies water in the tank lifted through a pump. The village has been divided into three zones based on the location of households. Each zone has its own distribution network and the demarcation into zones helps in proper rationing of water in times of stress. To prevent excessive use of water, supply in the tap is for a stipulated amount of time, twice a day normally for 30-40 min.

The gram sabha set up another committee called the Vigilance Committee, comprising the village elderly to oversee the construction of the tank and to prevent malpractices and wastage. A pump operator has been appointed who is a local villager whose responsibility is to operate the pump and bring to the notice of the VWSC any problems and incidences of damages. 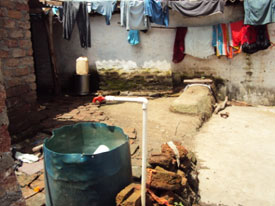 The operation and maintenance of this entire system is looked after by the villagers themselves. The contribution is collected after the harvesting season as people have money during those periods. A register is maintained to make entries on the contribution and expenditure.

In order to ensure source sustainability, recharge of groundwater has been planned. The villagres intend on using some of their currently unused dug-wells for this purpose. They have also started working on recycling their waste-water and establishing a bio-gas plant to strengthen their environment and water supply system. As part of this project, each household has an individual household toilet, as opposed to the open defecation practice they previously followed.

The initiation of the piped water supply scheme has meant a huge relief for the people of Didakhedi who because of their involvement in the programme feel a sense of pride in their achievement.