An analysis of the sanitation chain in 30 cities, through SFDs

A sanitation snapshot of urban Uttar Pradesh, India clearly indicates that households with onsite sanitation systems like septic tanks (47 per cent) far exceed those with sewer connections (28 per cent), hence septage management in the state becomes an integral part of sustainable sanitation.

CSE, India did the study across the sanitation chain in 30 cities of Uttar Pradesh. To understand the gaps in the service provision, SFDs were developed for each of the cities. Depending on the population, these cities were classified into four clusters and SFDs for these clusters were also developed to understand the key issues the cities, clustered together, are facing. Based on the analysis action plans for each cluster is proposed.

This study is available in two volumes. Volume 1 , (Managing Septage in Cities of Uttar Pradesh- An analysis of the sanitation chain in 30 cities, through SFDs) briefly describes about each stage of sanitation chain, analysis through cluster SFDs and also proposes action plan. Volume 2 (Assessment of faecal sludge management- Factsheets for 30 cities in Uttar Pradesh), on the other hand is a compilation of SFD factsheets of each of the 30 cities. Both these volumes were recently released at the state level workshop, which was attended by key government officials from state and all the 30 cities considered for the study. 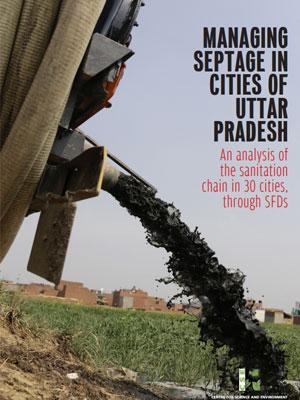