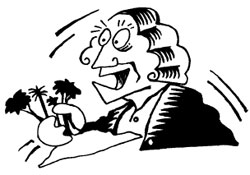 The first week of the newly opened court and the process looked a bit chaotic. My first day at NGT was on 6th July 2011, the third day of this court. Heading towards it with all freshness that the morning brings, I started as early as I could with the given address, RK Puram, sector-5 near Munirka. The plan was to reach the destination in time to have hassle free entry but never thought that the place will be so hidden. Scanned the entire place near flyover but nowhere was the sign of any building, only houses. Overstretching my eyes to locate the place I started looking for it even at nearby sectors, the twisted and bifurcated roads with puzzling questions like which one is the right road to the destination made me furious. RK Puram is designed in circle I thought, number of sectors housing small colonies, unawareness of people on the road about the court and adding to already miserable situation was the hot and humid climate. Scrutinizing nook and corner of road connecting to Munirka’s flyover actually helped, the moment I detected a place called Van Vigyan Bhawan I heaved a sigh of relief while reading National Green Tribunal (NGT) on green round plate fixed on the right side of the gate.

This court (NGT) started functioning since 4th July 2011 and bill that proposed its establishment was presented in parliament on July 29, 2009. It took 2 years for this special court to come into force for judgement on issues related to environment degradation and health impact. This one specially is the principal bench among others opened in Chennai , Kolkatta, Banglore, Mumbai. Only Delhi branch is functional others haven’t started yet.  Court can rightly be called ‘special’ because we are the third country following Australia and New Zealand to have such a system.

Having reached the place, the first thing noticeable on the way to courtroom is a big lounge and a small notice board. Lounge had lot of lawyers seated on comfortable sofas getting up only at time when there there turn is due. Notice board had detailed information of benches, judges, experts, appellants, respondents, timings. Confused after looking at the board and not able to make out for right timings I cared to bother few people clarifying about timings. They advised me to enter and attend the cases which will be heard in serial number one after the other, so the unsure thing there remains the ‘Timings’.

The 20 member tribunal having10 judges and other 10 as experts in environment had total 6 members of tribunal present that day, 3 each the judges and experts. Entered the courtroom, grabbed a comfortable chair in second row and started concentrating on the proceedings. It was hard to ignore so many split plastic curtains behind the back of judges that allowed sun rays to penetrate through the spaces in them enough, to lighten the entire room well. The room was nice air conditioned, just a bit small, well not perfect for big fat profit making companies to fit in but a reason that I could see and hear everything perfectly, felt as if I could touch the judges.

Came the time of my interaction with people in the courtroom and the proceedings, lost myself in hearings and issues to all three one after the other sitting benches.

Principal Bench: Two tall, fair coloured judges sitting on the bench going through lot of papers and a really big file. One among them was the chairmen who will be full time chairman as per NGT bill, the name LS Panta. On my right side sat a Supreme court lawyer representing ministry and supporting a thermal power plant coming up in Gujrat and on left side a lady who came all the way from Tamil Nadu representing municipality for hearing the decision on a solid waste facility that wants to come up. I know all this because I triggered the talk with both of them. I though the lady is the right person to ask what’s going on as she was listening to the conversation between judges and lawyers by straining her ears which made me feel this one definitely matters to her. She emphasised the importance of the case for the municipality whom she represented and left as the case got another hearing date as it got adjourned. All thanks to environment department which was not present for presenting its views. This one had lot of environment issues. People come from real far off places to attend the judgement and adjourning the case means trouble to come back specially for those who stay far off. It also is very costly process. One thing also clicked me there that public purpose cases are given special attention. Word really holds relevance.
I also interacted with adjacent sitting lawyer and found one thing was similar between him and the lady on my left, they both praised Panta.

First Bench: Funny but true, its already 2 PM. The time of hearing, and no one is in the court as spectator, I am the only one. I kept my bag on one chair sat down on the other, whole courtroom for myself. Felt odd but it was an opportunity to be a part of another group as rest everyone present there was from law community. Opportunity because lawyers usually remain surrounded and preoccupied with people, judges, press and companies so it was a rare chance to start up some chit chat. I exactly did so, started chatting with a young, learning lawyer. She seemed approachable and helpful explained me about few basics when it comes to laws just then two judges entered we stood up to show respect. When I say we, it means two respondents, two lawyer, two court masters and myself. Nobody for first case, the lawyer whom I know explained to ‘my lord’ (The judge) that appellate is behind the bars and case goes to second one which was on thermal power plant in Ratnagiri region of Maharashtra that came up in area where now moratorium exists. Judge suggested to the lawyer  Judge: “We can’t throw them out, they bring electricity, money but also pollution
The case can only be made strong if you prove that the report is not usable at all. We can emphasise them staying within the limits.”

A immediate twist in the conversation

Judge: Hey do you know about any environment law books?
Lawyer: Yes, my lord
Judge: Obviously you will in fact you should after all you have written many.

What is this I though. It was obvious in absence of public anyone can have there own way; I alone wasn’t looking like a threat for anyone there. End of the hearing happened by adjournment of case. This bench literally spoiled the day, first,
there talks reflected a judgement before the judgement. Secondly there was an air of non seriousness reflected from there relaxed behaviour which was highly unexpected from people who are looked upon for there formal behaviour and technical language.

I left the place.

Definitely the visit sent some clear messages across:

Few advices for my readers:

I would expect system to be a bit more organized and atmosphere inside to be a bit more serious than today so that it turns out to be successful and more close to fulfilling its goal for which it is set up. Standards now will have to be raised as now its not Supreme court or civil court or appellate, its tribunal.
The day is still worth sharing.