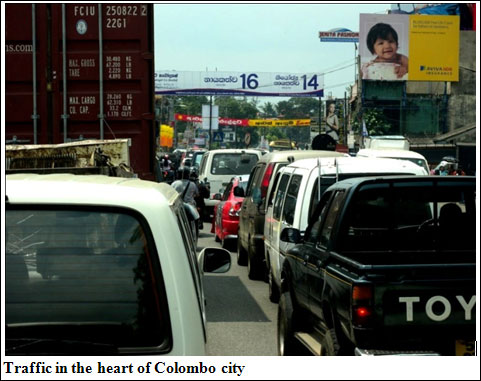 Much of the environmental issues related to the transport sector in Sri Lanka are associated with urban environment, and have been reported from the Colombo Metropolitan area and Kandy urban center which is the second largest city in Sri Lanka. Of these, air pollution due to vehicle emission, exacerbated by traffic congestion and condition of the fleet are two of the major issues that have emerged in recent years.

As per the statement made by Deputy Chief Medical Officer of Health, Dr. Ruwan Wijemuni of Colombo Municipal Council, automobile emissions kills up to 200 people per year in Sri Lanka alone. Since 1977 there has been a significant increase in the number of motor vehicles which has resulted in a steady increase in respiratory diseases, especially among the children, due to the presence of sulphur dioxide, nitrous oxide, carbon monoxide, etc. in the vehicle fumes which affect human health as well as the environment. 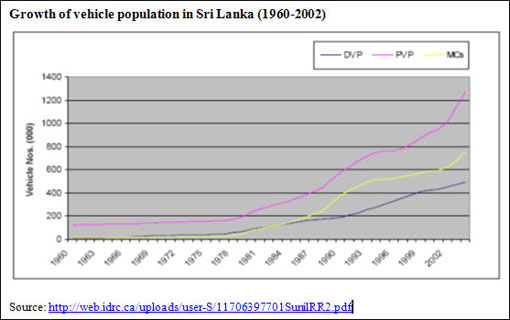 The Motor Traffic Department (DMT) has taken steps to ban vehicles with high smoke emissions in an attempt to reduce air-pollution in the City of Colombo.
The DMT is currently in the process of making arrangements to purchase 45 machines from the German government at a cost of Rs. 50 million to effectively test vehicle emissions.

Department sources said vehicles found to have high smoke emissions would be blacklisted and be given a specific period to rectify the defect. The gas analyzers have been imported from Germany to carry out the comprehensive roadside inspections and to measure air pollution levels in the country.

Department sources said vehicles found to have high smoke emissions would be blacklisted and be given a specific period to rectify the defect. According to DMT Commissioner S. H. Harris, vehicles belonging to the Sri Lanka Transport Board (SLTB), the security forces and some other government institutions would be exempted from this monitoring as they are excluded from receiving annual revenue licences.

Mr. Harris said vehicle owners should be able to produce vehicle emission certificates along with their revenue licences in the future and that vehicles driven without proper certification would be taken over by the authorities.