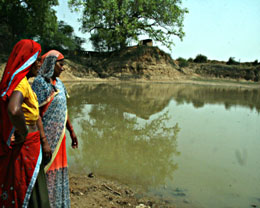 “Johad hai to gaon hai.” We were standing at the edge of the johad in Narayanpur, which was full of water. It was a hot day in the month of April, long after the monsoon season, when many small water harvesting structures become empty. But this johad was providing the residents of Narayanpur  sweet water throughout the year. Narayanpur is a village in Rewari district in Haryana, where the groundwater is predominantly saline and not fit for drinking. Water quality tests conducted by the Agriculture Technology Management Agency, Rewari showed that only 24% of tube-well waters are of good quality and remaining water is affected with varying degrees of salinity and sodicity.

A handful of women of Narayanpur used the slogan, Johad hai to gaon hai, to pump themselves up to repair the dilapidated johad in Narayanpur. “Usually we had to wait for hours for a drop of water, and in summers we used to wait for several days for a pot of sweet water, and finally after an immense wait we were compelled to use saline water from the handpump and well,” said Lalita, remembering the old days.

The village had to depend on water from outside the village as there was not sufficient sweet water from within the village. The women had had enough of waiting and scrounging for water. When Kiran and a few other women began this work, they were alone. Undeterred, they themselves undertook the laborious task of digging and leveling to repair the johad. Finally, other women from the village joined them. It took them a full 5 months to complete the work.

Narayanpur, a village of 225 families in Rewari district of Haryana has seen rapid decline both in rainfall and in groundwater levels. (See charts)  Most of the Rewari district, is, in fact designated as over-exploited by the Central Ground Water Authority.

The Peyjal Apoorthi Vibhag, Haryana, used to supply potable water to Narayanpur from the neighbouring village of Punsika. Severe water scarcity in 2007 led to the people of Punsika refusing to share their water with Narayanpur. For some years, the water supply department provided water through tankers. However, the water supply was never regular or adequate. Some families started buying water to drink. At this juncture, some of the women thought of reviving the old pond in the village which used to be the source of potable water before the piped water supply began in 1990.  The pond or johad had fallen into disuse since then.

The women approached the Social Centre for Rural Initiative & Advancement (SCRIA) to provide them guidance and financial help for this project. SCRIA agreed and asked the women to mobilise some part of the finances from the village. The village contributed Rs. 31950/- and SCRIA agreed to contribute the rest of the money to renovate the johad. The women themselves visited the hardware shops to buy materials and explained the purpose of the project and bargained for reductions in cost. They also paid part of the costs through shramdan. The total cost came to Rs. 73,950 and SCRIA contributed the remaining Rs. 42,000 towards the cost of the project, which was completed in March 2009.

The journey from an old decrepit johad to pond full of sweet water was not smooth. In the initial days, a small group of women used to leave their houses early each morning, collecting money and construction material on concession from the village businessmen. The village men mocked and made fun of them. The women were undeterred and labored at the renovation site the whole day. Seeing their determination, other women from the village also joined them. 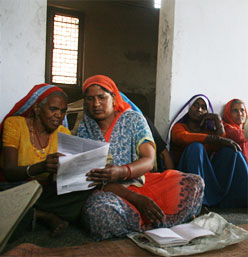 Water from the johad is accessed through two tubewells. One provides saline water and this water is distributed to the households through a pipeline that has been integrated with the existing pipeline. Water from the sweet water well is not distributed through the pipeline. People have to come to the tubewell and draw two to three pots per household only for drinking and cooking. The Sarpanch of the village, Anita explained that this was done intentionally to maintain the sustainability of the sweet water source.  As all the village women gather at the well during fixed hours, no one can take away more water.. Moreover, as water has to be carried as a head-load, and the johad is located at a distance of about 800 metres, it is not an easy task to carry more than 2-3 pots of water.
This decision, made by the women of the village is still adhered to, even after 2 years.

“Sweet water in the village is a blessing from the god. We will respect it like our temple”, said an elder woman of the village.

The johad has water throughout the year and provides the village water for all their needs. The village then went on to construct another rainwater harvesting system in a school very near the johad. The water from the roof of the school as well as the unpaved areas are filtered and recharged to the aquifer. As this is very near the johad, this recharge helps to retain the water levels in the johad. The village also took a decision not to grow water intensive crop like paddy.

This village has become a model village for the neighboring villages. Slowly but steadily changes can be noticed in the surrounding villages.