Across India, diesel generators, commonly known as DG sets, are used by factories, commercial establishments, residential societies and individual households for power backup. Due to easy availability in the market, small space requirement for installation and low cost of diesel, DG sets in India have become the preferred choice for providing backup power during outages.

According to estimates given by Central Electricity Regulatory Commission (CERC), in 2014, DG sets installed across India had a cumulative capacity of 90,000 MW, which is estimated to be increasing by 5,000 to 8,000 MW per year. Therefore, DG installed capacity constitutes, at present, around one-thirds of the total size of the grid-connected capacity in India. Such a large installed capacity of DG sets is due mainly to power deficits and erratic power supply across India. Although grid-based supply has increased considerably over the last decade, it is still inadequate to meet the electricity needs given sharp increase in consumer, commercial and industrial demand and weak financial condition of distribution companies (discoms) who are unable to purchase sufficient power.

DG sets-a ‘default’ option for residential societies New urban housing in India, particularly in the suburbs of metropolitan cities and minimetropolitan cities, is being largely built in the form of cooperative residential societies which provide several resources with power backup being one of the most important ones. Most of these societies are equipped with DG sets to supply electricity during power outages and are essentially functioning as ‘mini-grids’, providing a mix of diesel-based and grid-based electricity to their residents. However, diesel-based power supply in the societies is not only costly but also causes significant damage to environment and health. 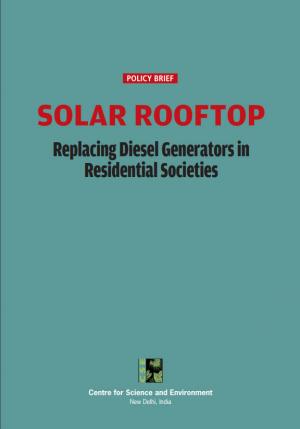