State of pesticide regulations in India

The pesticides’ regulations in India are governed by two different bodies: the Central Insecticides Board and Registration Committee (CIBRC) and the Food Safety and Standards Authority of India (FSSAI). CIBRC was established in 1968 under the Department of Agriculture and Co-operation of Ministry of Agriculture. It is responsible for advising central and state governments on technical issues related to manufacture, use and safety issues related to pesticides. Its responsibilities also include recommending uses of various types of the pesticides depending on their toxicity and suitability, determining the shelf life of pesticides and recommending a minimum gap between the pesticide applications and harvesting of the crops (waiting period)1. The other part of the CIBRC, the registration committee, is responsible for registering pesticides after verifying the claims of the manufacturer or importer related to the efficacy and safety of the pesticides. It is the Food Safety and Standards.

Authority of India that is responsible for recommending tolerance limits of various pesticides in food commodities. The FSSAI was established under the Food Safety and Standards Act, 20063.The State Agriculture Universities (SAUs), State Agriculture Departments (SADs) and other institutions related to specific crops like National Horticultural Board (NHB) and Spices Board of India make another set of recommendations for agricultural practices including use of pesticides. These recommendations are important considering the local needs of the states and research about specific crops, their diseases and insects. The SAUs and SADs have their own extension departments to reach out to the farmers. The farmers of India though have a conventional understanding of agriculture; they lack in the technical understanding of pesticides, their uses and safety aspects. This makes them vulnerable to misguidance and increases chances of unnecessary and inappropriate use of pesticides. The ever-increasing population of India also puts constant pressure on agriculture to improve productivity. The misuse of pesticides in such scenario is very likely.

The harmful effects of the pesticides are now established worldwide. The harm caused may be acute orchronic in nature. Farmers and agricultural labourers are the direct users of pesticides and are more likely toget affected by the acute toxicity of pesticides. The chronic toxicity affects the whole population. The residues left in the crops, soil and water after use get into the human food chain. Intake of pesticide residues through food and water has been linked to birth defects, toxicity to fetus, cancers, genetic defects, blood disorders, neurotoxicity and endocrine disruption.

In 2003, a Joint Parliamentary Committee (JPC) was formed after CSE released its report on pesticides in carbonated beverages of various brands. The JPC was formed with objectives of verifying the results that CSE had found and to suggest the criteria for evolving suitable safety standards for soft drinks, fruit juice and other beverages where water is the main constituent. The committee came up with various recommendations about the residue limits in beverages, fruits juices and drinking water as well as regulations of pesticides in India. 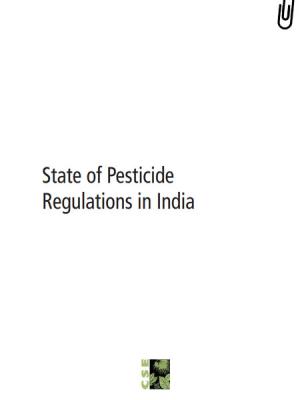