It was inevitable that Ganga, the largest river basin in India, constituting 26 per cent of the country’s landmass and supporting 43 per cent of its population, would be the starting point of any cleanup initiative of the Government of India. In the 1970’s the water quality of the much revered watercourse began to be visibly beset by the increasing trend of untreated sewage and industrial effluent discharge. Efforts to reduce pollution loads began in earnest in 1985 when the Centre launched the Ganga Action Plan (GAP). The Rs 462-crore initiative was aimed at improving the water quality to acceptable standards (defined as suitable for bathing) by intercepting the sewage and treating it before discharge in to the river. The programme selected 25 towns located along the river in the Uttar Pradesh, Bihar and West Bengal, all riparian states. At the time (in 1985), 1340 million litres per day (MLD) of sewage was discharged from Class I towns (100,000 and above), not factoring the generation from scores of smaller towns in the basin. 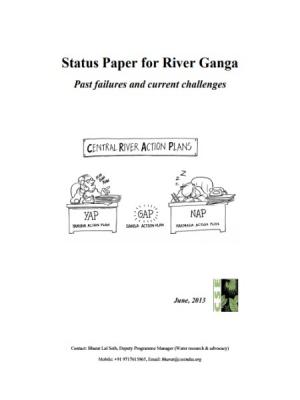