CoP18, Doha: An assessment A Gateway that leads nowhere

Sunita Narain on the Doha outcome It was a nail-biting end that came in a no-ball game. For the past 20 years, the world has been haggling about who will cut greenhouse gas emissions and how much. In the same 20 years, the science of climate change has become more certain. The world is beginning to witness what the future will look like – more extreme events like the typhoon Bopha and the tropical storm Sandy are expected to cripple life and livelihoods across the world. In fact, as the leader of the Philippine delegation emotionally pointed out, the world is running out of time -- his ocean nation has seen 17 killer typhoons in the past year.

Draft texts made, remade and re-remade: No consensus in sight COP President We can see the contours of a balanced package. It is clearly within reach. I understand every party may not be fully satisfied with the outcome. But I'd like you to not see things in isolation. Please consider for overall balance. Facilitators/Ministers/Co-chairs speak

COP President: "As of this moment, we have one more day. I urge parties to resolve outstanding issues

As part of an initiative to understand global climate negotiations, for better media reporting about the ongoing discussion at the global forum at the end of every year, a group of 9-10 journalists are taken to the Conference of Parties by CSE. This year, the following journalists are supported by CSE, where they get to attend sessions, events and negotiations first hand: 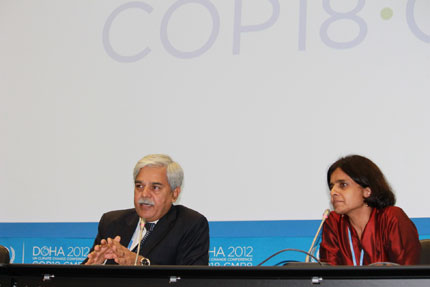 CSE-MoEF Side Event at CoP 18 Doha

India should walk out of the Doha negotiations if equity is not made a part of the deal, says Sunita Narain in Doha

Mistakes made at Copenhagen may get repeated at Doha climate talks

By: Indrajit Bose Date: Dec 3, 2012 None of developing countries concerns reflect in the negotiating text, closure of LCA in Doha looks difficult The second week of the Doha talks opened amid high drama as developing countries unanimously rejected the “draft text” prepared by the chairperson of the ad-hoc working group on long-term cooperative action (AWG-LCA). Such a draft text details the areas of convergence and divergence on all issues that are to be taken up for further deliberations by parties. Read more

By: Indrajit Bose Date: Nov 28, 2012 Developing countries say the work plan can progress only if outstanding issues are resolved first Talks are now in full swing at the climate meet at Doha in Qatar. The negotiations, which are happening under three different tracks—ad hoc working groups on Kyoto Protocol (AWG-KP), Long-Term Cooperative Action (AWG-LCA) and Durban Platform—have all been launched. And the differences between the negotiating countries, or Parties as they are called in the climate circuit, are out in the open in all the three tracks. Read more

By: Indrajit Bose Date: Dec 3, 2012 Successfully stalls attempts of developed countries’ move to bring agriculture under mitigation efforts India fiercely defended its farmers’ interests as the first week of Doha climate talks continued up to the wee hours of Sunday, December 2. Taking a firm stand that agriculture was a clear out-of-bounds sector with respect to emissions reduction, India stalled all attempts of the developed world to further discuss the issue in the ongoing CoP 18. The developing world’s long-standing position has been that any discussion on agriculture must be held in the realm of adaptation, not mitigation. The developed world wants to introduce the element of mitigation in agriculture. Read more

By: Arnab Pratim Date: Dec 3, 2012 Developed countries shy away from promising more money to developing nations from next year till 2020 for mitigation and adaptation measures Climate finance will be on the top of the minds of negotiators as the UN conference on climate change at Doha enters the second week on December 3. In the first seven days of the conference, the developed countries shied away from promising more money from next year until 2020 to developing countries to undertake mitigation and adaptation measures. The US $30 billion fast-start funding which started in 2010 ends this year and the next batch of funding, which is still under deliberation, begins only in 2020. Read more