The final outcome of the Durban Conference on Climate Change 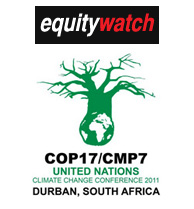 ??Our assessment: "The Durban Conference is a turning point in the climate change negotiations as even though developing countries have won victories, these have come after much acrimony and fight. At Durban the world has agreed to urgent action, but now it is critical that this action to reduce emissions must be based on equity. India's proposal on equity has been included in the work plan for the next conference. It is clear from this conference that the fight to reduce emissions effectively in an unequal world will be even more difficult in the years to come. But it is a conference, which has put the issue of equity back into the negotiations. It is for this reason an important move ahead."?

Some decisions and what they imply

The conference finally closed on Saturday early morning, after a grueling night of negotiations. The most contentious issue over the past few days was if the Conference would agree to fast track work on a legally binding agreement, which would cover all parties. Countries like India were concerned that this move would undermine the principle of equity and differentiation and that they would also be required to take the same level of commitment to reduce emissions as the already industrialized countries. The final decision is carefully crafted to keep in mind these concerns. The Durban conference agrees to launch "a process to develop a protocol, another legal instrument or an agreed outcome with legal force". It agrees that this work should be completed by 2015, so that this new agreement or outcome can be implemented from 2020. Therefore, countries like India, concerned that a new legal instrument, which would require them to take binding commitments, have won a victory.??

Decision: Will equity to be foundation of any agreement?

?The conference also agrees that the process should raise the 'level of ambition" so that the world can close the emission gap and keep below the 2°C or 1.5°C average temperature increase. This would keep the world on track from avoiding catastrophic impacts. The key issue is to ensure that equity will be the basis of deciding the emission reduction targets of the future. It is clear from the Durban conference that the industrialized countries would like to negate the principle of equity and sidestep it so that they can shift the burden of transition to the emerging countries who need their right to development. This issue was articulated strongly by India, but met with resistance. Now the challenge is to ensure that this remains the foundation of future negotiations as well.??

India has managed to bring the issue of equity back on the table. The decision on the Long Term Cooperative Action (LCA) accepts that the issue of equitable access to sustainable development, as demanded by India, must be debated and reported back to the next COP.??

The conference also agreed on the next phase of the Kyoto Protocol -- the only legal instrument in force to combat climate change. It also set a clear target of reductions of 25-40 per cent below 1990 levels by 2020 for the group of countries that are collectively known as Annex 1 parties -- listed for their contribution to the stock of greenhouse gases in the atmosphere. This second commitment period under the Kyoto Protocol would begin on January 1, 2013 till December 2017-2020. This is a big victory for the developing countries, which were demanding that this Protocol must continue. The next big challenge will be to ensure that the loopholes -- accounting methods, which allow for double-counting and weak domestic action -- are taken care of and closed.

??Decisions: Green Climate Fund set up, but with no money?

The Green Climate Fund has also been agreed upon. The most contentious issue in the setting up on the fund was its governance and to whom the fund would be accountable to? It has been agreed that the fund will function under the conference of parties to the climate convention; it will have 24 members, equally from developed and developing with representatives from small island nations and least developed countries; co-chairs will also be similarly divided. Because of opposition from key developing countries, the World Bank or the Global Environmental Facility have not been charged with the functions of running the fund.??

But as the fund has no real or promised money, it will be an empty shell and a shallow victory. The industrialized countries want the private sector to contribute, but nothing is clear, where the much-needed funds for mitigation and adaptation will come from.