After the publication of the study on pesticide residues in soft drinks in August 2003 by PML, a Joint Parliamentary Committee (JPC) was constituted by the Indian Parliament on "Pesticide Residues in and Safety Standards for Soft Drinks, Fruit Juices and Other Beverages" to check the veracity of the PML’s study and to set the safety standards for soft drinks. In February 2004, JPC released its report in which it found PML’s study to be correct and recommended the government to set pesticide standards for the soft drinks.

For the past three years, in 20-odd meetings, the Drinks and Carbonated Beverages Sectional Committee, FAD 14, of the Bureau of Indian Standards (BIS), has been deliberating on the issue of pesticide residue standards for soft drinks. This sectional committee includes representatives of all interested parties - industry (including Coca Cola and PepsiCo) and industry associations, food and nutrition scientists from the government scientific institutions, Union ministry of health, Union ministry of food processing and Union ministry of consumer affairs and consumer and environmental groups. In October 2005, the committee finalised the standards for pesticide residues in soft drinks. This final standard, which has not been notified yet, has set a limit of 0.1 ppb for individual pesticides and 0.5 ppb for total pesticides in soft drinks.

In December 2005, PML decided to check whether the samples of soft drinks available in the market are within the limits prescribed by BIS or not. A total of 57 samples, of 11 brands of Pepsi Co and Coca Cola available in the market, were collected from 12 different states of the country. PML tested the samples using internationally recognised United States Environment Protection Agency (USEPA) methodology for organochlorine pesticide and organophosphorus pesticide. Extraction and analysis was done as per the given methodology, using Gas Chromatograph with Electron Capture Detector using a capillary column for analysing organochlorine pesticides and Gas Chromatograph with Nitrogen Phosphorus Detector using a capillary column for analysing organophosphorus pesticides. Final confirmation was carried out by GC-MS. 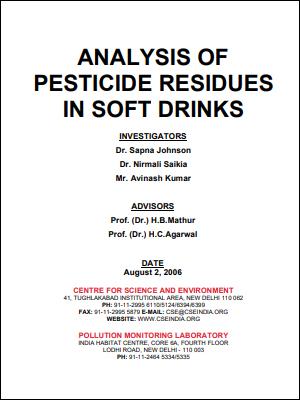