The Centre for Science and Environment (CSE), a non-governmental organization based in New Delhi, has set up the Pollution Monitoring Laboratory (PML) to monitor environmental pollution. PML is an ISO 9001:2008 accredited laboratory certified by SWISSCERT Pvt. Ltd. for conducting Pollution Monitoring and Scientific Studies on Environmental Samples. The Laboratory has highly qualified and experienced staff that exercise Analytical Quality Control (AQC) and meticulously follow Good Laboratory Practices (GLP). PML has all the equipments required for microbiological analysis of samples such as autoclave, laminar air flow, shaker incubator, BOD incubator and microscope etc. Further, it is equipped with most sophisticated state-of-the-art equipments for monitoring and analysis of air, water and food contamination, including Gas Chromatograph with Mass Detector, Gas Chromatograph (GC) with ECD, NPD, FID and other detectors, High Performance Liquid Chromatograph (HPLC), Atomic Absorption Spectrometer (AAS), UV-VIS Spectrophotometer etc. Its main aim is to undertake scientific studies to generate public awareness about food, water and air contamination. It provides scientific services at nominal cost to communities that cannot obtain scientific evidence against polluters in their area. This is an effort to use science to achieve ecological security.

Antibiotics are generally used to treat microbial diseases in humans as well as in animals. However, the misuse and overuse of antibiotics results in resistance in pathogenic bacterias well as in the endogenous flora of exposed individuals, be it humans or animals (Baldwin et al., 1976; Howe et al., 1976; Hinton et al., 1982; Piddock, 1996 and Van denBogaard, 1997). The antibiotic resistant bacteria have the ability to resist towards the actions of naturally occurring or synthetically produced compounds inimical to their survival (WHO ISDA, 2007).

The misuse and over use of antibiotics is considered to be the most significant reason foremergence, selection and spreading of antibiotic resistant bacteria in both animals and CSE Study: Antibiotic Resistance in Poultry Environment humans (Neu 1992; Witte 1998; Okeke et al., 1999 and Moreno et al., 2000). The resistant microbes may act as a potential source in the spread of antimicrobial resistance to human pathogens. It is also well established that antibiotics can lead to the emergence and dissemination of different resistant bacteria which can be passed on to people via food ordirect contact with infected animals (Van den Bogaard and Stobberingh, 2000; Schroeder etal., 2002). 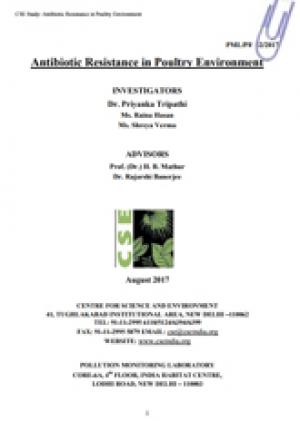