Twenty four children’s toys and child care articles available in the local market of India were analyzed for eight phthalates as children toys are plasticized with phthalates. All toy samples showed the presence of one or more phthalates including di-(2-ethylhexyl) phthalate (96%of the samples), di-iso-nonyl phthalate and di-iso-decylphthalate (42% of the samples) at a concentration ranging from 0.1% to 16.2%. Soft toys contain higher levels of phthalates as compared to hard toys as primary function of phthalates is softening of hard plastic materiel.

Phthalates can be released from soft PVC plastic by surface contact, especially where mechanical pressure is applied (e.g. during chewing of a PVC teether) as they are not tightly bound to the plastic, but are present as mobile components of the plastic matrix. Phthalates, which make up 10%–40% of the total weight of a toy, have been under scrutiny because of their potential health effects, particularly on reproductive development (Duty et al. 2003). Children are more vulnerable to the potential adverse effects of phthalates given their increased dosage per unit body surface area, immature metabolic system capability and developing endocrine and reproductive system. Several studies across the world reported the presence of high levels of DINP, DEHP and even DIOP, DIDP, DBP and other phthalates in products intended for mouthing, or with a high potential for mouthing by children of the age group 0.5–3 years and their migration into saliva (Stringer et al. 2000; Niinoa et al.2001; Bouma and Schakel 2002; Schreder 2007; Hitchcock 2008). 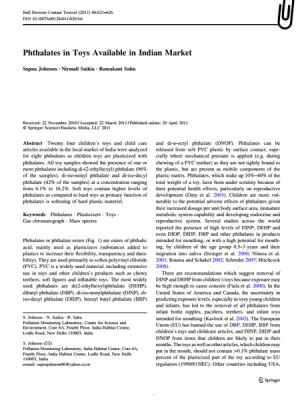