Your walls could influence your child's IQ

Lead is a highly toxic metal found in small amounts in the earth’s crust. Because of its abundance, low cost, and physical properties, lead and lead compounds have been used in a wide variety of products including paint, ceramics, pipes, gasoline, batteries, and cosmetics. In India, as in most developing countries the battery industry is the principle consumer of lead using an estimated 76% of the total primary and secondary lead produced annually.

Lead is taken up by humans by ingestion and inhalation. Eating lead bearing paints by children and drinking of lead contaminated water are important sources of non-industrial poisoning. Lead absorbed in course of occupational exposure is superimposed on lead absorbed from other means which leads to increased body burden of lead.

Exposure to lead can cause a variety of neurological disorders such as lack of muscular coordination, convulsions and coma. Lower levels of lead have been associated with measurable changes in children’s mental development and behavior (NAS 1993). These include hyperactivity; deficits in fine motor function, hand-eye coordination, and reaction time; and lowered performance on intelligence tests. Chronic lead exposure in adults can result in increased blood pressure, decreased fertility, cataracts, nerve disorders, muscle and joint pain, and memory or concentration problems.

The effects of lead toxicity have been well established, with clear evidence of harm found in children whose blood lead levels are above 10 µg/dL and some evidence that harm may occur at lower levels (U. S. CDC 1991; Lanphear et al. 2000; NAS 1993). A common source of lead exposure for children today is lead based paint and the contaminated dust and soil it generates (Clark et al. 1991; Lanphear et al. 1995, 1998; Lanphear and Roghmann 1997; McElvaine et al. 1992; Rabinowitz et al. 1985; Shannon and Graef 1992). 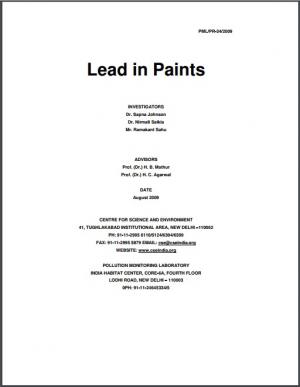