Honey has the image of being a natural and healthy product. However, today honey is produced in an environment, polluted by different sources of contamination. The contamination sources can be environmental and apicultural ones. Environmental contaminants are pesticides, heavy metals, bacteria and radioactivity. These contaminants are present in air, water, soil and plants and are transported to beehives by bees. Contaminants from beekeeping practice includes acaricides used for parasitic mites (mainly Varroa) control, bee repellents used at honey harvest, pesticides for wax moth and small hive beetle control and antibiotics (Bogdonov, 2006).

Antibiotics are found in honey largely because they are used in apiculture for treatment of bacterial diseases. Oxytetracycline is commonly used to treat European foulbrood disease (EFB) and American foulbrood diseases (AFB) caused by Paenibacilus (Bacillus) larvae and Streptococcus pluton bacteria, respectively. However, there are now reports of tetracycline resistance in these bacteria because of its widespread use. Other antibiotics such as erythromycin, lincomycin, monensin, streptomycin, enrofloxacin etc. are also reportedly used in beekeeping. 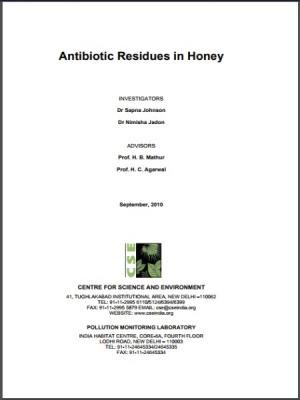