Lakes and wetlands, whether man-made or natural, fresh water or brackish, play a vital role in maintaining the environmental sustainability of the urban areas. These water bodies perform significant environmental, social and economic functions, ranging from being a source of drinking water, recharging groundwater, and acting as sponges to control flooding, supporting bio-diversity and providing livelihoods. However, they have become the biggest casualty of urbanization today. Acknowledging the significance of lakes, recently released Nation Capital Regional Planning Board’s draft revised plan for 2021 projects has also suggested that lakes/ponds should be revived and conserved and, should be used as surface storage reservoirs and ground water recharge basins to meet the challenges of increasing water demand. The report further recommended that water from tail cluster of canals and harvested rainwater should be used for revival of lakes and ponds (NCRPB, 2013).

Despite knowing their environmental, social and economic significance, these water bodies are being continuously ignored. Today these water bodies are encroached by the land mafia, full of sewage and garbage thanks to apathetic urban authorities. Because of unplanned urbanization, much of the landscape around the lakes has been covered by impervious surfaces. As a result, instead of rainwater, it is the sewage and effluents that are filling up urban water bodies. Once the sponges of urban area, today urban lakes are turned into a hazard that get choked even with low rainfall and overflow into the blocked canals during high rainfall causing floods in the city. It is the disappearance of these sponges of the city that has exacerbated floods and sharpened the pain of droughts (Churning Still Water, 2012). 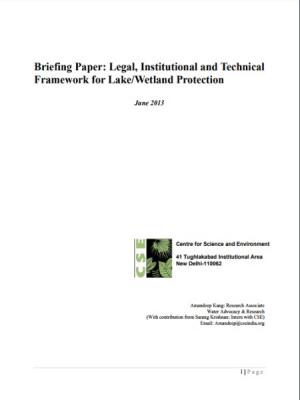