Cheap Fix: The rush to make profits out of carbon-fixing engenders another kind of colonialism

At least two Norwegian companies are acquiring several thousand hectares of land in East Africa to plant fast growing trees like eucalyptus and pine. Tree Farms and Norwegian Afforestation Group expect to make profits from these plantations by selling timber and wood and in the future, through sale of carbon credits on basis of carbon dioxide storage in the plantations. A study, ‘CO2lonialism - Norwegian Tree Plantations, Carbon Credits and Land Conflicts in Uganda’ conducted by Harald Eraker for Norwatch, a Norwegian non-governmental organisation, documents that neither of the companies tried to hide the fact that carbon trading was an important motive behind their involvement in the region1.

This seemingly harmless project of planting trees takes a completely different hue against the backdrop of Kyoto Protocol where industrialised countries are committed to cut their overall carbon emissions by at least 5 per cent below 1990 levels in the period 2008-2012. Clean Development Mechanism (CDM), a flexibility mechanism, allows industrialised nations and their private corporations to invest in carbon efficient projects in developing countries while the net benefits of carbon reduction accrue to the investors.

These plantations could very well mark a beginning of more such projects. The modalities and procedures governing CDM are yet to be decided, possibly in the climate negotiations to be continued at the Conference of Parties in November 2000 in The Hague. The whole idea of accruing carbon credits through afforestation is based on the understanding that a given amount of carbon dioxide is removed from atmosphere and is stored in plants and dry biomass. Unlike the reserves of oil, natural gas and coal, carbon dioxide reserved in trees and other biomass is very unstable and may be released back into the atmosphere, at any time, by burning and logging.

The deal leaves scope for exploitation given that developing countries, more often than not, do not possess adequate know-how to command enough say in the negotiations. The land lease agreement between Ugandan forestry authorities and the two companies, heavily tilted towards the latter, bears testimony. Tree Farms has leased about 20,000 hectares of land in forest reserve areas in Tanzania, Uganda and Malawi since 1995 while Norwegian Afforestation Group came into existence in 1999 and, so far, controls land in Uganda only. The companies lease the areas for a 50-year period with the option of renewing the contract for another 50 years. Apart from a one-off sum (US $312) paid at the time of signing regardless of size of the leased area, the authorities receive an annual rent of US $3 for each hectare planted with forest. There is a provision of adjusting rent every ten years. No rent is paid for areas not planted and there is nothing to prevent the leaseholder from leaving that area unplanted or leasing it for other activities.

Norwegian Companies have done carbon dioxide storage calculations with their own carbon accounting formula although the rules for such calculations have not yet been worked out and adopted. These calculations make it quite evident that as opposed to a few hundred thousand US dollars that the companies would be required to pay to Ugandan forest authorities as rent over a growth period cycle of about 25 years (see Table 1), they themselves stand to gain some millions in US dollars in terms of probable carbon profits (see Table 2). 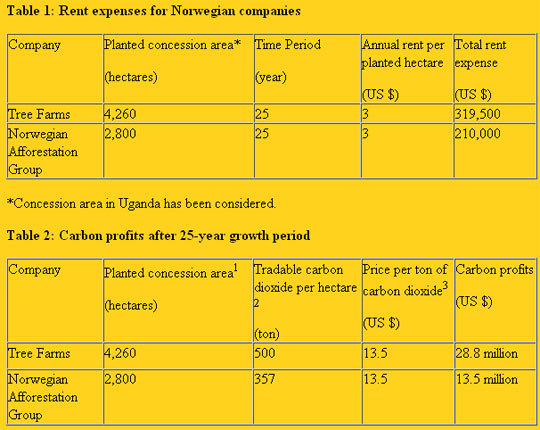 1. Concession area in Uganda has been considered.
2. As per company calculations.
3. Based on the estimate by CICERO, Norwegian Institute for climate research.

The study also underlines the potential of such afforestation projects in causing social unrest and conflict, especially in Uganda. Local farmers and fishermen are dependent on Tree Farms controlled areas for their livelihood. Constant pruning of trees and uprooting of seedlings done by locals to favour agricultural crops in the plantation areas adversely affects the productivity and quality of plantations. This may necessitate eviction of these farmers.

Another significant point raised by the study is that once an area has been planted and consequent carbon credits have been traded in the market, it would not be possible to use that land for any other purpose in the foreseeable future. This is essential, as the area must remain forested in order not to release carbon dioxide into the atmosphere. Once a carbon sink, always a carbon sink. The study goes on to say that the entire lease agreement resembles neo-colonialism. The African government authorities forego any opportunity of changing land use even in their people’s interest and when faced with commitments themselves, these nations would not be able to use the ‘carbon forests’ for reducing emissions at home.

Fast growing trees such as pines and especially eucalyptus need huge amounts of water to grow and hence such plantations can result in depletion of groundwater reserves thereby disturbing the ecological balance in the area.

Tree Farms recently briefed the Norwegian foreign ministry that it had entered into an agreement with Industrikraft Midt-Norge, a company interested in building conventional gas-fired power plants (GPPs), giving them the first option on buying carbon credits. This assumes significance given the fact that Norway is committed not to exceed its greenhouse gas emissions one per cent above the 1990 level for the period 2008-2012. The GPPs will increase Norway’s carbon dioxide emissions by 5-6 per cent and companies like Industrikraft Midt-Norge and Naturkraft are arguing that this can be compensated through purchase of carbon credits2.

Trygve Refsdal, visiting advisor to the Uganda Forest Department, remarks aptly, “Forest-planting in Uganda and other poor countries must, firstly, aim to meet the needs of the country and the local people, not the needs of the international community”. Norwegian tree-planting projects give an impression of regular afforestation projects that should be encouraged but will they really contribute towards a better climate or will they start a rat race for carbon-fixing? Norway and other industrialised countries eventually need to brace themselves for domestic cuts by moving towards clean energy and clean fuel.