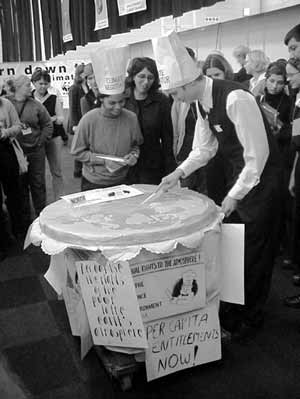 Embarrassed US delegates refused to accept the larger share of a 'Carbon Cake' offered to them by NGOs yesterday. Most of them either walked away without responding, pretended to be too busy, or not US delegates at all!

A tiny part of a huge round cake with a map of the world on it was given to the head of the G77, signifying the crumbs that the developing world is receiving at the climate negotiations, rather than its rightful share of the Earth's atmosphere. The rest was delivered to the US delegation office. "It would be better if the pie was larger," the delegate who finally received it remarked. Perhaps they would like the poor to move to the moon!