Children in the Chulha Trap

This quick assessment has been carried out by Centre for Science and Environment to as certain how switching from biomass-based solid fuels to cleaner liquefied petroleum gas (LPG) for cooking of midday meals in anganwadis (day care centres that facilitate informal learning under supervision) in Biharcan help reduce exposure of children to toxic air. This has been done to support the joint initiative of the Bihar government and Bihar chapter of the Indian Academy of Paediatrics along with UNICEF, under which a pilot scheme to replace biomass-based stoves with LPG for cooking mid day meals for children has been started.

Based on the results of this pilot, the Bihar government is expected to expand the programme across the entire state. The rapid indoor air quality monitoring during cooking of midday meals on biomass-based cooking stoves has helped create a baseline of exposures. Children in rural India are already exposed to high levels of cooking stove pollution due to widespread dependence on biomass-based fuels. The few hours that they spend daily in anganwadis and schools that serve mid day meals should not add to that exposure. Replacement of these stoves with LPG can help eliminate such exposure levels. Letting this evidence and understanding to directly inform public policy can be instrumental in creating the necessary confidence for stronger action not only in Bihar but in other states as well. The government programmes designed for improving nutritional status of children cannot perpetuate toxic risk for children.

This initiative is consistent with the recommendations of the Union Ministry of Health and Family Welfare’s steering committee report on air pollution and health. The report states that proximity and duration, and not general air conditions (subject to climate and weather), are the key factors in assessing the effect of air pollution. How much pollution is breathed in by individuals is heavily influenced by nearby sources such as stoves. Eliminating such exposure will reduce the risk to public health considerably. 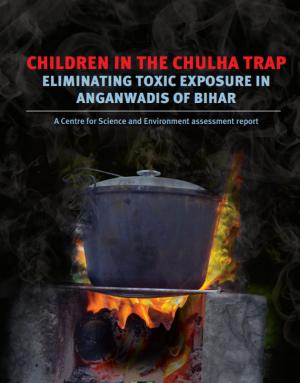