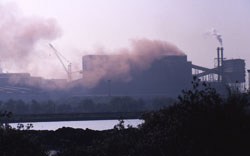 Dhanbad known for its rich deposits of coal and hordes of industries is also notorious for being the most polluted city of Jharkhand. In a study carried out by IIT Delhi, Dhanbad stood 13th among the 88 most critically polluted clusters of the country. The region consists of a high density of coal mines (103), coal washery (8), captive thermal power plants (3), beehive coke oven plants (126), soft coke plants (25), refractory plants (72), coke briquette plants (25), stone crushers (110) and brick kilns (118).

Large scale coal mining and industrial activity has played havoc with the air and water quality in the region. Environmental degradation has also taken a toll on the health of the residents. People suffer from various diseases due to the contaminated water they drink and the polluted air they breathe. The Comprehensive Environmental Pollution Index (CEPI) calculated for the region came out to be an astounding 78.63 (break up of CEPI- Air - 64.50, water – 59.00 and land – 65.50) and any  industrial cluster with CEPI more than 70  is considered critically polluted.

To curb the unabated pollution in the region, the Jharkhand State Pollution Control Board (JSPCB) and Dhanbad District Administration prepared a Dhanbad Action Plan. The plan included recommendations from a panel of experts from Indian School of Mines (ISM), Central Institute of Mining and Fuel and Research (CIMFR) and Central Pollution Control Board (CPCB). However, many industries failed to comply with the stringent guidelines of the Action Plan. In order to check non- compliance with the Dhanbad Action Plan, the JPCB distributed minutes of the review meeting held on April 20 to Bharat Coking Coal Ltd (BCCL), Central Coalfields Ltd (CCL), SAIL units, Tata Steel,  Dhanbad Municipal Corporation, Mineral Area Development Authority (MADA) and other 100 hard coke factories. The minutes were circulated to compel the stakeholders to implement the recommendations put forward in the meeting. “The industries will now keep a regular check on the progress of the Action Plan and the defaulters will be persecuted under the norms specified in Air Act and Water Act,” says Shri S K Sinha, Member Secretary, JSPCB. He adds that there are inadequate sprinklers in the collieries to check air pollution and has instructed the BCCL and ECL (Eastern Coalfield Ltd) to install sewage treatment plants. The Board has also issued a directive to close down three washeries in Dhanbad responsible for discharging effluents in the Damodar River. The washeries belonging to SAIL (Chasnala Coal Washery) and BCCL (Sudamdih and Madhuban Coal Washery) were shut down on May 2.