Fossil Fuel Suicide Why fossil fools will cost us the Earth

The Kyoto Protocol will be a disaster of bigger proportions if it subsidises carbon-based energy through CDM.  The world will then not achieve safe concentration levels until the end of the century.

Even a focus on energy efficiency will not work (see below) 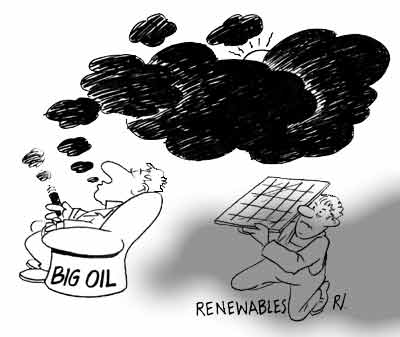 
Renewable energy is faced with an ever receding target!

No matter how cheap it gets, fossil fuels, which are highly subsidsed, will get cheaper

Under CDM developing countries must demand renewables developed by industrialised countries.  If  they accept fossil fuel technology, once they have taken on the commitments they will have to phase out the very technology they invested in recently.

The South could provide an ideal market for renewable technology once it has been developed.  It would be modular, and many people in the developing world are not linked to the electricity grid.

But renewables do show dramatic results:
Renewable energy has made progress over the past few years despite lack of encouragement from governments

If we dont move towards renewables immediately, we will be 'locked' into fossil fuels for a long time.