New Delhi, June 12, 2018: On June 8, Delhi’s peak electricity demand broke all previous records, hitting a new high of 6,934 megawatt (MW) at 3:28PM. A new analysis by Centre for Science and Environment (CSE), released here today, shows how the insidious link between subsidised electricity, rising ambient temperature, growing use of air conditioners (AC) and inadequate central regulations for energy performance of ACs, is triggering the huge demand for electricity in Delhi.

Releasing the analysis, Anumita Roychowdhury, executive director, research and advocacy, CSE, said: "Without any pricing or energy efficiency measures to reduce the demand for electricity or substantial substitution with renewable energy, environmental and economic costs can escalate significantly."

“This is starkly evident this summer in the growing demand for electricity and peak demand in the city which is influenced not only by the commercial use of electricity, but also by growing use of energy-intensive appliances for cooling in the household sector. Cheap electricity, rising incomes, and badly designed buildings that trap heat, are inducing demand for energy-intensive active cooling practices and systems upsetting the energy demand of the city,” she added.

CSE has carried out an analysis of electricity consumption this summer to understand the trends and nature of demand in the city, and the likely impact of growing dependence on air conditioning to escape the heat. Electricity consumption data has been sourced from daily and monthly reports of the State Load Dispatch Center, Delhi, the apex body which ensures integrated operation of Delhi’s power system.

Historical data has been sourced from the annual and Load Generation Balance Reports of the Central Electricity Authority. Consumer and demographic data is sourced from the Delhi Statistical Handbook, while the weather data source is the India Meteorological Department(IMD) weather station at Indira Gandhi International Airport.

The 400 subsidised units can accommodate use of one AC, lights, fans and other appliances depending on the nature of use. If a 3-star split AC runs for six hours a day for 30 days in a month, it will consume about 260 kWh of electricity, which can be easily covered under the subsidised 400 units a month offered by the Delhi government. Delhi government data shows that the subsidy was availed by 82 per cent of homes last year – which means even higher income households are benefitting from the subsidy and the low rates, since there is no mandatefor energy audits or compulsory disclosure of annual energy consumption.

Even if consumption crosses the limit for subsidy, the normal rates are very low -- much lower compared to other mega cities. In Mumbai,the electricity price ranges from Rs 3.67 to Rs 10.37 per unit; in Kolkata, Rs 4.89 to Rs 8.92 per unit; in Noida,Rs 3 to Rs 5 per unit; in Gurugram,Rs 2.7 to Rs 6.3 per unit; and in Bengaluru,Rs 3.4 to Rs 7.6 per unit. Even the highest slab with maximum rate in Delhi kicks in only if the monthly consumption crosses 1,200 units and is charged just Rs 7.75 per unit;in comparison, the maximum tariff in Mumbai is of Rs 9.95 per unit and is applicable on all monthly consumption above 500 units.

Moreover, Delhi does not impose any penalty for over-consumption. Gurugram rescinds the benefit slab if the monthly consumption crosses over 800 units and charges a flat Rs 7.10 per unit for all the units consumed. Delhi produces only about 20 per cent of the electricity it consumes in a year and barely 2 per cent of its energy requirement is met by renewable sources.

ISEER is supposed to take into account the varying performancesof ACs under different outdoor temperature conditions and computes efficiency by comparing energy consumed at the cooling provided over a year based on historical metrological data. However, the system is still generic and defeats the purpose of ISEER which is supposed to provide realistic data to consumers. This often leads to under-reporting of energy consumption. ISEER for split and window ACs is tweaked in a fashion that it gives the same efficiency rating as under the old system (which the CSE study had found to be faulty). There is a 2-star difference between ISEER benchmark for window ACs and split ACs, even though both run on same fixed-speed compressor technology. In other words, a 5-star window AC is only as efficient as a 3-star split AC. This is causing unnecessary confusion among customers, giving a false impression of prospective savings to buyers of window ACs.

The way forward
Said Roychowdhury: “It is clear that a supply-driven subsidy policy for electricity and weak performance standards for cooling devices can prove to be counter-productive and perpetuate energy crisis, forcing more and more power generation at high environmental and economic costs. This needs urgent attention as in Delhi, for instance, space cooling accounts for almost 25-30 per cent of the annual consumption of electricity. During the summer months, as CSE finds, this can go upto 45-50 per cent of the electricity consumed.”

According to an estimate by the BEE, ACs also contribute almost 60 per cent of the Delhi’s peak electricity demand. According to the IEA report, India is to see a 15-fold jump in demand for power for space cooling by 2050. But savings is possible by influencing the demand for electricity. This can help to a great extent to prevent the unintended consequences of energy insecurity, pollution and climate impacts.

Both the Delhi and national governments must step in:

CSE recommendations for the Delhi government

CSE recommendations for the Central government 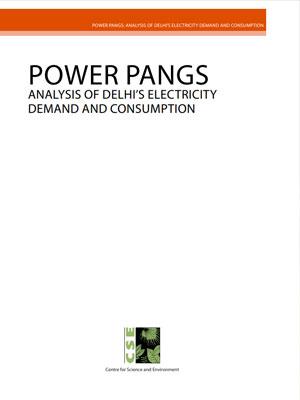