Protection and Management of Urban Lakes in India

Lakes are important part of urban ecosystem. Though relatively small in size, lakes perform significant environmental, social and economic functions, ranging from being a source of drinking water, recharging groundwater, acting as sponges to control flooding, supporting biodiversity and providing livelihoods. Water in lakes is an easily available source of water for the needs of many sectors of economy such as agriculture, domestic and industrial. These waterbodies, whether man-made or natural, fresh water or brackish play a very vital role in maintaining environmental sustainability particularly in urban environments especially in today’s context when the cities are facing the challenges of unplanned rapid urbanization.

At present, in India, lakes and wetlands are in extremely bad shape and are in varying degrees of environmental degradation. Despite knowing their environmental, social and economic significance, city planners have willfully neglected and destroyed these water bodies.

Today these water bodies are encroached, full of sewage and garbage. Because of unplanned urbanization, much of the landscape around the lakes has been covered by impervious surfaces. As a result, instead of rainwater, it is the sewage and effluents that are filling up urban waterbodies. Once the sponges of urban area, today urban lakes have turned into hazards that get choked even with low rainfall and overflow into the blocked canals during high rainfall causing floods in the city. It is the disappearance of these sponges of the city that has exacerbated floodsand sharpened the pain of droughts (Churning Still Water, 2012). Considering the present bleakwater scenario of Indian cities, today we need our urban lakes and wetlands more than ever.

Although, there is a plethora of policies and acts for the protection and restoration of urban lakesand wetlands, urban waterbodies are in extremely poor condition. There numbers are declining rapidly. For example at the beginning of 1960s Bangalore had 262 lake, now only 10 hold water. Similarly, in 2001, 137 lakes were listed in Ahmadabad city, and over 65 were reported being already built over (Excreta Matters, 2012). In Delhi in 2010-11 to check the changes in 3 waterbodies in last 10 years the status of 44 lakes was ascertained and it was fond that 21 out 44 lakes were gone dry due to rapid urbanization and falling water tables (Singh & Bhatnagar, 2012). Another example exhibiting this increasing loss of urban waterbodies is Hyderabad, within last 12 years, Hyderabad has lost 3245 ha. area of its water in the form of lakes and ponds (Times of India, 2012). There are endless examples in India that shows such devastating state of urban water bodies. 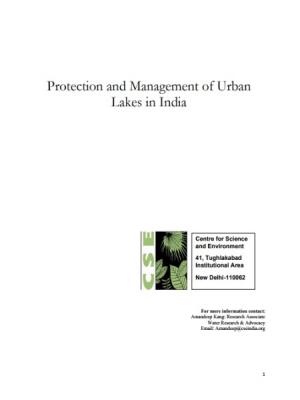