Report on Panchayat Workshops in Jhabua

Given the spread of water scarcity, pollution and groundwater overdraft, and the rapid increase in the non-availability of potable water in India, in 2009 the Department of Drinking Water and Sanitation issued the National Rural Drinking Water Programme guidelines. The government has set the deadline of March 31, 2012 for 100 percent drinking water coverage of rural habitations, with communities managing their water supply systems and the states ultimately withdrawing from providing water services. The new guidelines envision a decentralised water supply system where the in-village water supply scheme is planned, approved, implemented, managed, operated and maintained by the Panchayat and community itself. In this respect, the village level water security plan becomes the key foundation for implementation, essentialising the involvement of community members.

With this backdrop, CSE conducted workshops in 4 villages of Jhabua district, Madhya Pradesh, for the village community on designing their own water supply schemes. The objective was to create an understanding of the need to prepare Village Water Security Plans through water budgeting. 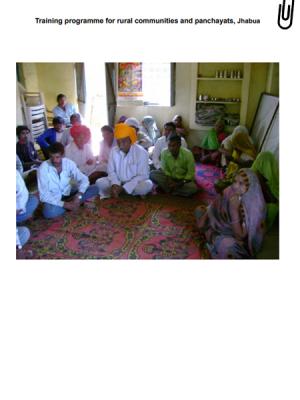