Two weeks of discussions on the Kyoto Protocol on climate change have just ended. But core problems remain. The world's worst polluters are still scotfree. It is business as usual for industrialised nations. A report from Bonn 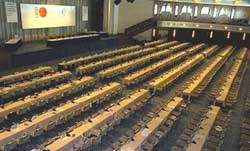 Six months after the Kyoto meet, governments convened again to deliberate climate-change affairs. The United States led an attempt to set up a free market trading system which would enable the us to do zero at home and allow other developed countries to meet their emissions reduction commitments by paying off nations like Russia which emit less. The message was clear. Put very simply, the rich countries still wish to keep on polluting. As cheaply as possible.

Who wants what, and how?

The subsidiary bodies of the United Nations Framework Convention on Climate Change (UN FCCC) met recently in Bonn, Germany. These were the first formal FCCC meetings since the adoption of the Kyoto Protocol at the Third Conference of Parties (COP-3) in December 1997. After the "who wants what" questions in Kyoto, the negotiators were embroiled in "who wants how" questions in Bonn. Participants suffered a distinct loss of momentum, caused by the many unresolved priorities for COP-4 slated for November 1998 in Argentina. The burden of resolving many complexities is upon the Subsidiary Body on Scientific and Technical Advice (SUBSTA). NIKHAT JAMAL QAIYUM spoke to KOK KEE CHOW, current Malaysian chair of SUBSTA, to get his views on where the negotiations are headed. She also spoke to ESPEN RONNEBERG, counselor, Permanent Mission to the United Nations of the Republic of the Marshall Islands.

Industrialised nations have introduced a Clean Development Mechanism to meet their reduction targets. In the second part of her climate change report, NIKHAT JAMAL QAIYUM examines how these countries perverted the original Brazilian proposal to suit their needs 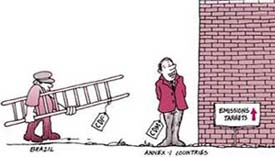 THE assignment of responsibilities to Annex I (industralised) countries according to their contribution to climate change has been a critical issue haunting climate negotiations. Brazil first proposed a "budget" concept on historical emissions at the Ad Hoc Group on the Berlin Mandate (AGBM) meet held in July-August 1997. It found surprise approval from the United States at the Third Conference of Parties (COP-3) held in Kyoto in December, 1997.