Watch out for what you eat. It could be killing you slowly and sweetly: says new CSE junk food and nutrition study

New Delhi, March 30, 2012: Junk foods – all the stuff that most of us love to gorge on – have enough trans fats, salt and sugar to lead us to an early onset of diseases in the young. And what’s worse, neither the companies, nor the government is bothering to tell us what these foods contain, says a new Centre for Science and Environment (CSE) study which was released here today.

“We all know junk food is bad; we still eat it. But do we know how bad it is? Do we ever check what we are eating and whether what that packet of chips or Maggie has what it claims it has? Our new study, which looks at the nutritional value of these foods, is to make people aware of what these foods really contain and what they will do to our health”: says Sunita Narain, director general, CSE.

CSE, which is known for some truly ground-breaking studies on food and contamination, says this is the first comprehensive Indian study to have looked at nutritional claims made (or not made) by junk food makers and how they compare against our ‘allowed daily intake’. “And the findings are pretty damning,” says Chandra Bhushan, CSE’s deputy director general, who also heads the Pollution Monitoring Lab which did the study.

Daily intake? Now what is that?
The National Institute of Nutrition (NIN) and the World Health Organization (WHO) have set certain benchmarks of how much salt, sugar, carbohydrates and fats every individual can have on a daily basis to stay healthy. These benchmarks add up to what constitutes a balanced diet.

For instance, the NIN benchmark for the maximum salt that one person should have in a day is 6 gram, while the WHO puts it at 5 gram. The normal 80-gram packet of Maggi noodles that many of us gobble up almost on a daily basis has over 3.5 gram of salt – enough to take care of over 60 per cent of our allowed daily salt intake.

Says Chandra Bhushan: “Which means for the rest of the day, we will be restricted to have food which should contain less than 2 gram of salt. Not a happy choice at all for us in the sub-continent who love to have our salt and eat it too.”

The terror is in the trans fats
Salt, however, is not the real or only problem. The real problem is trans fats, or the ‘bad fats’.

The WHO says that in a balanced diet, a maximum of 1 per cent of total energy should come from trans fats. Therefore, an adult male can have 2.6 gram of trans fats per day, while an adult female can have 2.1 gram and a child (10-12 years) can have 2.3 gram.

CSE’s tests reveals a dirty truth of misinformation, misbranding, wrong labelling and obfuscation indulged in by companies, some of whom are on the top of the charts. They show that many junk foods claim they have ‘0’ trans fats; some don’t even bother to mention how much trans fats they have. A child who eats one of those immensely savoury MacDonald’s Happy Meals finishes up 90 per cent of all his daily requirement of trans fats. The packet of Happy Meal makes absolutely no mention of this massive dosage of trans fats!

PepsiCo’s Lays (Snack Smart) was sold till February 2012 through huge advertisements to say that these chips are healthy because they have zero trans fats and are cooked in healthy oil – this claim was quietly removed later. When CSE checked, it found as much as 3.7 gram of trans fats per 100 gram of the product in March 2012 batch – which is a dangerously high dose! PepsiCo never bothered to inform consumers.

So what does all this mean for our health?
What makes junk food so unhealthy are the high levels of salt, sugar, fats and carbohydrates in them. Non-communicable diseases such as obesity and diabetes accounted for more than 50 per cent of all deaths in India in 2005; by 2030, they will kill two-thirds of all Indians.

The latest National Family Health Survey (2005-06) says at least one in every eight Indian is overweight or obese. In our cities, the situation is worse: one in every five urban Indian is obese and prone to numerous health disorders that obesity generates.

The CSE study has a deadlier tale to tell. The researchers behind the study say that the heavy doses of trans fats, joined with that of salt – which comes from all the so called ‘fun foods’ --  work together to trigger ill health which can lead to death.

Trans fats are notorious for clogging arteries: they deposit on the walls of the arteries and make them narrower. On top of that, when one has large amounts of salt, the blood pressure increases. The heart has to work overtime to push the blood around, which weakens it considerably.

Says Chandra Bhushan: “And there is enough global evidence to suggest that more and more young people are succumbing to problems of the heart at a much earlier age. At an age when they should have been at their productive best, they are loosing productive life by eating this junk.”

“Coming at a time when the world is struggling to contain NCDs or non-communicable diseases, when schools across the country are banning sale of junk foods on their campuses, when several countries are trying desperate measures such as ‘fat taxes’, this study tells us that we need stronger regulations that will reduce the quota of fats, sugar and salt in junk foods, and ones that will force companies to provide information to the public mandatorily,” says Narain.

For details, please call Souparno Banerjee on 9910864339 or write to him at souparno@cseindia.org 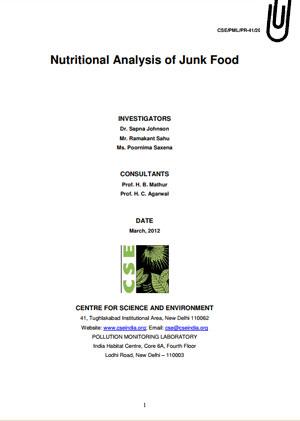 Run for a cause: The Delhi Quarterathon

CSE welcomes UP decision to ban junk food in schools

Watch out for what you eat. It could be killing you slowly and sweetly: says new CSE junk food and nutrition study

Take junk food out of schools, say participants at a CSE Round Table

With a pinch of salt

Junk food in schools: Centre gets a week to circulate action taken report