Instituted in March 2015 under India’s central mining law, the Mines and Minerals (Development and Regulation) Act (1957), District Mineral Foundation (DMF) is a defining opportunity to overturn the decades of injustice meted out to the thousands of people living indeep poverty and deprivation in India’s mining districts. Established as a non-profit trust, DMFs in every mining district have the precise objective to“work for the interest and benefit of persons and areas affected by miningrelated operations”. It has also been aligned to an important scheme of the Government of India, the Pradhan Mantri Khanij Kshetra Kalyan Yojana (PMKKKY), that was launched in September 2015 to implement various developmental projects and welfare programmes in mining-affected areas with DMF funds, alleviate the adverse impacts of mining on people and environment, and create long-term sustainable livelihood opportunities for mining-affected people.

With DMFs coming into effect, the right of the people to benefit from natural resources has been recognised for the first time. DMF, thus, is avehicle for sharing mining benefits with communities who have only been burdened by such activities. Miners and mining companies are required to pay a sum – determined on the basis of their royalty payments – to the DMF Trust of the district where the mine is located. Provisions of the DMF law is also to be implemented taking into consideration the provisions of important laws ensuring people’s rights – the Panchayats (Extensionto Scheduled Areas) Act (PESA), 1996, the Scheduled Tribes and Other Traditional Forest Dwellers (Recognition of Forest Rights) Act, 2006(the FRA); and constitutional provisions related to the Fifth and Sixth Schedules for governing tribal areas.

This report is an evaluation of the progress and performance of DMFs in India’s 50 key mining districts across 11 states. The focus of the review is on examining the implementation status of DMF provisions as related to financial contributions and accruals, institutional arrangements including transparency and accountability mechanisms, and planning and budget allocations for undertaking various works and programmes that serves the needs of the affected communities. The reference period of the study is from institution of DMFs in 2015 till nearly the end of the previous financial year, February 2017.

In about two years’ time, a total of about Rs 5,800 crore has been collected under DMF Trusts in various mining districts. However, the potential corpus is still higher, as in certain states such as Tamil Nadu and Uttar Pradesh DMFs are yet to roll out. Also in some big mining districts such as Yavatmal in Maharashtra, Guntur in Andhra Pradesh and Khammam, Adilabad and Karimnagar in Telangana, the collection so far has been much less than what was estimated. 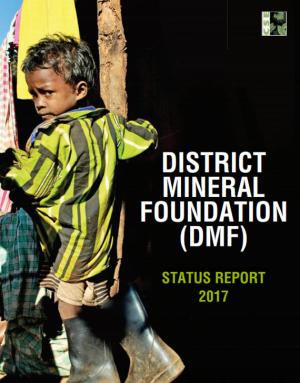