Engines of the Devil

To understand the problem posed by diesel, it is necessary to understand the new information that has emerged over the last decade about its ill-effects. For a long time diesel was considered a ‘green fuel’ because it is 15-20 per cent more fuel-efficient than petrol. This means that one litre of diesel gives 15-20 per cent more mileage than one litre of petrol. But the 1990s have seen diesel take a severe beating and is now being increasingly recognised as a devilish fuel.

The first big finding came with air pollution experts discovering that diesel exhaust consists of 10-100 times (that is, one to two orders of magnitude) more particles than petrol. More than that, experts soon began to realise that it is not the total quantity of particles that matters so much for public health as the size of the particles in vehicular exhaust. The smaller the particles, the worse they are because they go deep into the lungs and stay there for a longer time.

As a result, air pollution monitoring systems in the West stopped measuring the total concentration of particles in the air. Instead, they started measuring only the concentration of those particles which had a diameter of 10 microns or less, called PM 10 or respirable particulate matter. By the mid-1990s, US environmental scientists were arguing that it is not even PM10 that matter. It is PM 2.5, that is, particles of 2.5 microns or less that are important. Unfortunately, monitoring systems based on PM2.5 have been difficult to implement because the equipment is still very expensive and the process is cumbersome. 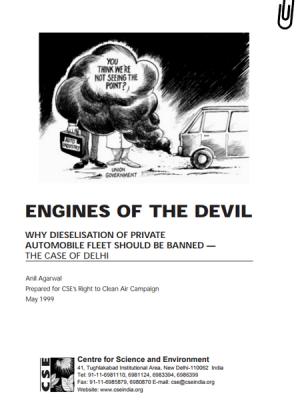