The traditional agricultural system of Koraput (Odisha) has been recognized by the FAO as a Globally Important Agricultural Heritage Site (GIAHS) at the recently concluded 99th Science Congress. This recognition is for outstanding contribution to promoting food security, biodiversity, indigenous knowledge and cultural diversity for sustainable and equitable development. Living Farms is a non profit working in the Koraput region of Odisha with the tribal communities practicing the traditional form of agriculture.

The dialogue on sponge iron industry organised in Rourkela, Odisha on Januray 22, 2011 by Centre for Science and Evnironment saw participation from affected people, NGOs, media, industry and the Odisha State Pollution Control Board.

India’s richest lands – with minerals, forests, wildlife, water sources – are home to its poorest people. Mining in India has, contrary to government’s claims, done little for the development of the mineral-bearing regions of the country: says the latest publication from New Delhi-based Centre for Science and Environment -its 356-page 6th State of India’s Environment Report, titled Rich Lands, Poor People - Is Sustainable Mining Possible?

In the years to come, India's expanding steel production will be largely driven by sponge iron. Sponge iron, also known as direct reduced iron(DRI), is produced from direct reduction of iron ore (in the form of lumps, pellets or fines) by a reducing gas produced from natural gas or coal. Sponge iron gives a cheaper way of producing steel which has a high demand in the market. 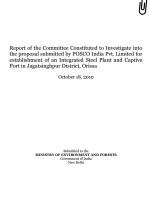 For establishment of an Integrated Steel Plant and Captive Port in Jagatsinghpur District, Orissa October 18, 2010 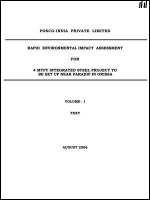 Bank at your doorstep

Technology is helping public sector banks find customers in rural India. This is part of the Centre's efforts to include villages in the organised financial system; to ensure they are not cheated of their wages. Pilots show promise