It is difficult to imagine how a greater tragedy could occur to a peace time population than the deadly gas leak in Bhopal on the night of December 2-3, 1984. The survivors of the dead victims, the injured and others who suffered, or may in the future suffer due to the disaster, are entitled to compensation. This Court is firmly convinced that the Indian legal system is in a far better position than the American courts to determine the cause of the tragic event and thereby fix liability. Further, the Indian courts have greater access to all the information needed to arrive at the amount of the compensation to be awarded the victims. 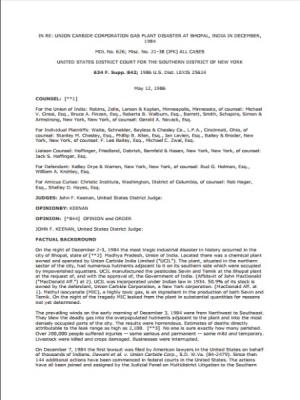