India has one of the highest arable land areas in the world1 with a net sown area of 140.1 million hectares (ha).2 Agriculture and allied sectors employ 54.6 per cent of the total workforce in India (2019–20).3 The country successfully adopted the Green Revolution in the 1960s—an input and chemical-intensive agriculture model—to overcome food scarcity by use of high yield varieties, pesticides, fertilizers, and agriculture machinery and irrigation systems.

However, over the years, this resulted in several negative impacts related to ecological, economic and existential aspects of agriculture. This includes declining soil fertility and food diversity, increase in farmers’ debt, dependence on agro-chemicals, and pest resistance. In addition, chemical-intensive agriculture adversely affects the health of humans and animals.

These negative impacts have been deliberated upon extensively in the last few decades and even more so in the last few years. As a result, the agro-ecological movement has started gaining momentum. This includes efforts by champion farmers and civil societies. While the government passed its first policy on organic farming in 2005, subsequent action was minimal. In 2015–16, it came up with a flagship programme, called Paramparagat Krishi Vikas Yojana (PKVY), which apart from being limited in scale, continues to face implementation challenges.

Nonetheless, over the last two decades, the government’s action to upscale agro-ecological practices has been half-hearted and severely limited. One main reason is the lack of conviction among policy makers, which has prevented them from taking ambitious action to mainstream organic and natural farming. This has largely been due to the limited consensus among the scientific community in favour of organic and natural farming and the singular view of yield to assess these non-chemical agricultural practices. This has been attributed to limited evidence, which was building up over the last two decades but failed to catch the attention of policymakers.

This report consolidates and presents the evidence on holistic benefits of organic and natural farming such as on yield, livelihood, soil health and environment. This is done by analysing the results of the government’s own long-term research project from 2004 and other scientific studies over the last decade. This first of its kind report aims to help inform the policy making process, create awareness among the larger scientific community and build capacity in agriculture extension systems. The report can be of help to farmers and civil society members who want to take the message and learnings forward. 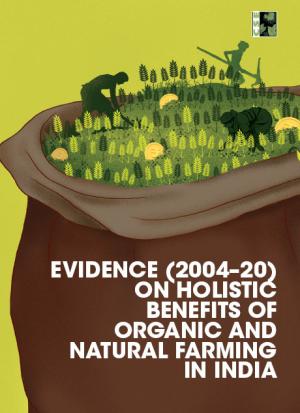