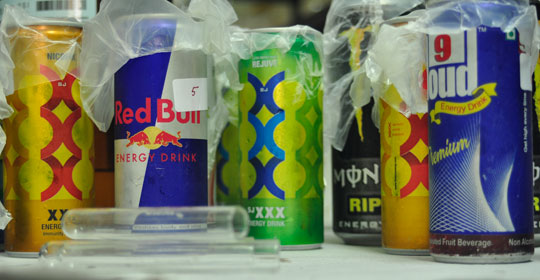 How much caffeine is good enough? The Central Committee for Food Standards (CCFS) in 2009 fixed 145 ppm (parts per million or mg/kg) as the permissible amount of caffeine in carbonated beverages (soft drinks). 145 ppm was considered as a safe limit for caffeine and was scaled down from the existing 200 ppm.

Now the apex food regulatory body, the Food Safety and Standards Authority of India, is considering a 320 ppm limit for caffeine for a category of drinks called 'Energy Drinks'.

The regulators are ready to allow the caffeine levels in energy drinks to increase three times than what is considered safe. Energy drink is a misnomer, say health experts. Except for sugar, other ingredients do not provide energy. The 'feeling' of energy though comes from caffeine, which is a stimulant.

Energy drinks is a rs 200 crore market is growing at a 20 per cent annual rate. The drinks are under the category of 'proprietary food' and hence are being sold unregulated. Though Red Bull, the leading energy drink brand with nearly 50 per cent control on the market, debuted in 2002 the food regulators have not yet been able to draw regulations for these drinks. The rules are still in the drafting stage and it is believed that a standard of 320 ppm of caffeine is going to be set.

Energy drinks are replacing sports drinks. Retailers display the two drinks together, creating a confusion in the minds of consumers. Moreover, the association of energy drinks like Red Bull with Formula 1 car racing adds to the confusion that these can substitute sports drinks. Ireland has recommended a ban on promotion of Red Bull in sports events.

Countries like Denmark, Uruguay and Turkey have banned energy drinks altogether while Sweden has banned its sale among children.

Red Bull India Private Ltd advises athletes to consume Red Bull half an hour before training or competing. Those performing in intense sports events can consume one or two cans during the event or at half-time break with adequate water; it can also be consumed after an event to aid recovery, the company says. In response to queries by Down To Earth, the company stressed that Red Bull was not a fluid replacement and that a lot of water should be had with the beverage. But this piece of 'advice' is missing from the labels.

Fitness clubs and gyms promote energy drinks, read 'Red Bull', as easily as they would promote a sports drink. Olympia, a South Delhi gym suggests that Red Bull (sugar free) is best consumed 30-40 minutes before exercise. There is no mention of water here though.

Products promoted as sports drinks, have glucose and electrolytes that replenish body fluids during strenuous activities and prevents dehydration. But they too come with a word of caution - they should be had only if the exercise is intense.

Its consumption with alcohol is also on the rise. Ninety per cent of the sales of energy drinks in India is due to consumption of alcohol.

Nightclub managers say vodka with energy drinks is very popular in the age-group of 25-30. Women particularly prefer it because of the taste. Red Bull and Burn, both energy drinks, is a favourite with pub goers and night club regulars.

The energy drinks contain high dose of caffeine, which is a powerful psycho-stimulant and is believed to counter effects of alcohol by warding off drowsiness. Studies reveal otherwise.

The combination of energy drinks with alcohol can impair cognitive function and reduce symptoms of alcohol intoxication, including the depressant effects, thus increasing the probability of accidents and favouring the possibility of development of alcohol dependence- writes John P Higgins in a study published in the Mayo Clinic Proceedings in 2010. He has co-authored the paper "Energy Beverages: Content and Safety" with Troy Tuttle and Christopher Higgins.

Energy drinks mixed with alcohol affect other organs as well. Alcohol inhibits the breakdown of nutrients into usable products in the body by decreasing the secretion of digestive enzymes from the pancreas. Electrolyte disturbances, nausea, vomiting and heart irregularities can also occur from excessive consumption.

Energy drinks, as defined by the Food Safety and Standards Authority of India (FSSAI), is a non alcoholic beverage containing ingredients like caffeine, guarana, taurine, ginseng and glucoronolactone that act as stimulants. The FSSAI is the apex food regulatory body in India and it does not have any rules to tame energy drinks yet.

Energy drinks made news in 2005 when Central Food Laboratory, Mysore, under the directions of customs authority Chennai tested Red Bull as carbonated beverage and seized its consignment at the Chennai port as it 'did not conform to the standards prescribed by the PFA'. The lab treated energy drinks as carbonated beverages, which then had a caffeine cap of 200 ppm (parts per million or mg/kg), while Red Bull had nearly 320 ppm of caffeine.

There was lack of clarity on standards — the PFA authority at the Centre had registered the beverage as a proprietary product; the state food authorities conducted tests keeping in view norms for carbonated beverages.

Red Bull was in trouble again when regulations for proprietary food were amended in September 2008. The change in Rule 37-A(2) of the PFA Act states that proprietary foods have to conform to the standards under appendices of the PFA Act and Rules. The amendment implied that energy drinks would have to conform to a caffeine cap of 200 ppm, so far applicable to carbonated beverages.

Six months on, the caffeine limit in carbonated drinks was lowered to 145 ppm on the recommendations of the Central Committee for Food Standards.

After this amendment, the customs department at Chennai again seized consignments of energy drinks; tests by CFL showed these violated rules. Red Bull again moved court, this time challenging the amendment. The Madras High Court, on May 20, 2010, granted an interim stay on the amendment, which was extended in July 2010, till further notice.

With relaxed norms, the energy drink players are increasing, very few restricting themselves to below 145 ppm while others touching the 320 ppm mark . There are others that have remained below 100 ppm and they still call themselves energy drink.

Red Bull claims that 100 ppm is the typical level of colas and not energy drinks and hence, it would be incorrect to categorize any beverage with that level of caffeine as an energy drink.

The FSSAI, in the meanwhile is on the slow track to make rules for energy drinks. The FSSAI formed the expert group which noted that the term 'energy drink' was a misnomer and that there had to be a justification for fixing the limit to 320 ppm. They also called for a risk assessment study, that was done by the National Institute of Nutrition (NIN), Hyderabad. The NIN, in its risk assessment report gave a clean chit to high caffeine levels in energy drinks. The deliberations are on.

But these recommendations have a long way to go. They will be first considered in the scientific committee and then go to the food authority. It will take another three months for the regulations to be notified and sent to the Ministry of Health and Family Welfare.

Caffeine in your diet

While the controversy brews, there are other sources of caffeine in one’s daily diet — coffee, tea and carbonated beverages- that should be kept in mind. FSSAI needs to fix the standard for energy drinks after considering the existing consumption pattern. Denmark, for example, banned energy drinks because the daily consumption of caffeine of its population was already very high.

The risk assessment report of NIN states the current consumption of caffeine in India is low and there is scope for more consumption. But the NIN report is largely based on literature review. There is no sample study which has recorded daily intake of caffeine by people and the impact any additional intake will have. By estimating consumption on a per capita basis, which is quite low considering India’s billion plus population, the NIN report has actually discounted the adverse impact of energy drinks on a large caffeine consuming section of the population.

The cap that FSSAI is proposing for energy drinks—320 ppm caffeine and two cans of energy drinks per day— means a person will consume about 160 mg caffeine every day from energy drinks alone. There is then no accountability for the caffeine that is consumed through tea or coffee. Low doses of caffeine—20 mg to 200 mg/day — have been found to improve mood and alertness. But caffeine in energy drinks can easily exceed the amount necessary to promote cognitive functioning. This may result in high blood pressure and heart rhythm irregularity. Certain deaths due to consumption of caffeine through these beverages have also been reported. So far FSSAI has not heeded the warning.

The complete report card is on Down To Earth website