SKS Power Generation Limited has proposed to set up a coal-based Thermal Power project of 1200 MW, configuration of 4x300 MW, at Binjkot, Darramura, Badejampali and Gindola villages in Kharsia tehsil of Raigarh district in Chhattisgarh. By establishing the proposed power plant, its target is of adding power generation capacity of 78,990 MW in the country by 2012.

The report is a technical evaluation of the Environmental Impact Assessment document submitted by SKS Power Generation Limited as a part of the clearance process for a 1200 MW coal-based thermal power plant. EIA has been prepared by Hyderabad based VIMTA Labs Limited.

The M/s. SKS ISPAT & Power Limited proposed to set up a coal-based thermal power plant of 1200 MW having configuration of (4x300) MW. The area to be acquired for the the project is around 960 acres. The raw material, coal will be sourced from the nearby captive coal mine i.e., Fatehpur coal block.

For running a power plant, water and coal are the key raw materials. According to the EIA report, project will consume 6.02 MTPA of captive coal and 108000 m3 of water per day. The proposed plant will draw water from the river Mahanadi, which flows 30km away from the plant.

The EIA report has provided the information on coal requirement and water demand for the plant. According to the EIA report, plant will consume 108000 m3 of water per day from the river Mahanadi but failed to provide the river flow information and water availability in Mahanadi to support this plant in summer. The report also failed to discuss the other comprehensive users who depend on the river.

According to the website of Ministry of Environment and Forest, on River Mahanadi in Chattisgarh, MOEF has given clearnce to more than 30,000 MW power plant in between 2005 to 2010. According to the estimation made by us, all these power plants (considering 30,000 MW) will draw 2880000 m3 of water/day (assuming load factor of 80% and specific water requirement of 5 lit/unit) from River Mahanadi in Chattisgarh. This is signifigant in quantity and cummulative impact on water availability would be very high if all the plants start generating power. Addition of one more thermal power plant of 1200 MW would create additional pressure of 108000 m3 of water per day on the river Mahanadi. So whether river Mahanadi has sufficient water to support this power plant is a big question. Another important question is that what will be the cummulative impact on lean flow of the river ie. during summer.

The river flow data, particularly the lean period flow (i.e. in summer), is crucial because river Mahanadi is being exploited heaviliy by the industries in Chattisgarh. Every industry in Chattisgarh claimed that they would draw water from Mahanadi but failed to provide whether the river has sufficient water to provide to these industries or not. The river also supplies water to a number of cities and irrigation canal for agriculture. For example,  Cuttack draws 11000 m3/day of water and Bhubaneshwar draws 43000 m3/day for city supply. Orissa is also heaviliy dependent on Mahanadi. This clearly shows that Mahanadi is  extensively used by other cities also. Hence, detail river flow assessment is very important before setting up the plant.

The EIA report stated that ESP will be installed with the stack as a pollution control equipment and claimed that the emissions from stack will be less than 50 mg/Nm3. However EIA report failed to provide the techanical specification of ESP such as number of fields, area of collecting electrode etc. Moreover, the report also stated that they will use coal having ash content of 41 percent. Such high content of ash and lack of techanical specification of ESP makes it doubtful for ESP to achieve the standard of  less than 50 mg/Nm3.

The EIA report has given the land use pattern of 10 km radius but it has not provided the breakup of land use of the acquired land (i.e. 960 acres). But according to the Remote sensing data Chapter-3, page-54, the entire project acquired area shows the agricultural land. However the executive summary of the EIA report, page- E4 states that most of the acquired land is un-irrigated land and wasteland. The EIA report failed to provide the type of land to be diverted for fly ash disposal.  Also, the location of ash pond is close to the Reserve forest.

There are numbers of tress at the proposed plant site, but the EIA report failed to state the number of tree to be cut down for the project siting, both for the construction of power plant and for fly ash disposal.

The project site is ecologically sensitive because there are 12 forest blocks; out of which 9 are reserved forests and rest are protected forests. According to local villagers, leopard, deer, sloth bear that comes under schedule I of (Wildlife Protection Act. 1972) also exist in the area but the report did not highlight the presence of these animals.

Fugitive emission from coal handling and fly ash: The company will use 42.5 acres of land for coal handling and storage. Further, coal is proposed to be stored in open, which is harmful from environmental perspective. The open coal storage yard has high potential to increase fugitive dust and can adversely affect the surrounding ambient air. This being an important issue, the EIA report failed to provide mitigation measures for the same such as closed storage yard.

Fly ash : The EIA report has failed to provide the quantity  of ash to be lifted for commercial use and the quantity of fly ash to be disposed off in ash disposal pond. The report has calculated the land requirement and life of ash pond, assuming the total fly ash to be disposed off in ash pond. This is an important issue from the point of view of fugitive and groundwater contamination. This calculation was presented in a superficial manner. Moreover, the EIA report mentioned that depth of ash pond would be 15 metres. Without any scientific data, the report shows no impact on surface and ground water. The report stated that they will adopt both dry and wet method, but the estimate of amount of dry and wet fly ash disposal was missing.

The EIA report, Chapter-4, page15 suggested that the plant will provide liner material (HDPE) to prevent groundwater contamination due to ash pond but it failed to provide the budgetary provision to put the liner material in such a large area of 310 acres. 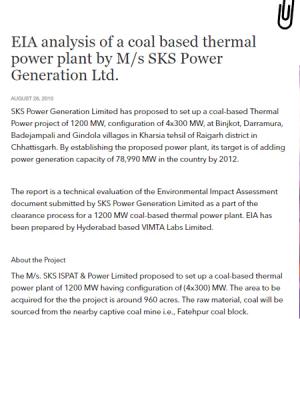