Background of the report

The Government of India approved the establishment of 2x1000 MW of Nuclear power plant units at Jaitapur in Taluka Rajapur, District Ratnagiri, in Maharashtra in October 2005. However, to enable India to have nuclear trade with other countries, owing to the advancement in technology and in view of recent development in international scenario of NSG waiver, Government of India now ‘in principle’ has approved 6x1650 MW plant at the same location. The Proposed Jaitpur Nuclear Power Project (JNPP) is one of the largest proposed projects in Asia. The report is a technical evaluation of Environmental Impact Assessment (EIA) prepared by NEERI.

A multi -unit Nuclear Power plant is proposed to set-up 9900 MW with the configuration of (6x1650) at Jaitapur, Taluka-Rajapur, Ratnagiri in Maharashtra. The area acquired for the project is 970 hectares. And daily it requires 8640000 m3 of water from the sea to run the plant.

Location wise, plant is sensitive and likely to pose significant impacts on marine ecology as well as on surrounding environment. For instance, project is located in between the Rajapur creek and Vijayadurg creek. Both these creeks are rich in mangrove and entire cost of project site is widely used for fishing however, EIA report states that proposed project will cause no impact on environment and livelihood although around 11000 fisherman (as reported by the local community) are dependent on fishing.

The foremost consideration in this EIA report is that the proposed project will construct 2300 metre long breakwater at Jaitapur creek but the EIA report failed to mention the impact of breakwater on beach erosion and sand accretion. The construction of breakwater will pose risk of sand deposition in the southern part, which is rich in marine biodiversity due to presence of Vijaydurg creek and confluence of Vaghotan River and Arabian Sea. There is also a fear that erosion of beach would take place in the Northern part, which is also rich in marine biodiversity due to Rajapur creek. The opening of the breakwater is towards the north and the features of the ocean currents will make erosions in the north and sand deposition in the south where Vijayadurg creek, which support the vast marine bio diversity, likely to get hampered due to the construction of this project. This is a big environmental concern, but EIA report is completely silent on this issue.

The EIA report does not provide any permanent storage of radioactive waste, though it has discussed different ways of disposing the waste. The proposed plant is 25 times bigger (with respect to Kalpakkam nuclear power plant) but the EIA report anticipated that the radio active disposal due to the operation of JNPP will not have any adverse impact on land and water components of the surrounded environment.

The site selection of JNPP in the EIA report shows that it is a waste and barren land but the topographical map of the proposed area shows the area is a mixture of agricultural and grazing land.

Being a high impact project, the consultants have not generated the site-specific primary data on demographic characteristic and impact on existing infrastructures and amenities in the study area. The EIA report had used the old census of 2001 and also there is discrepancy in the population data. The EIA report is not unambiguous about the population density in the area. For example, chapter-2, section 2.2.8 mentions 96 persons/ sq km whereas chapter-1, page- 6 mentions the figure of 78 persons/per sq km and in the same chapter, page- 7, the density given is 150 persons per sq km. 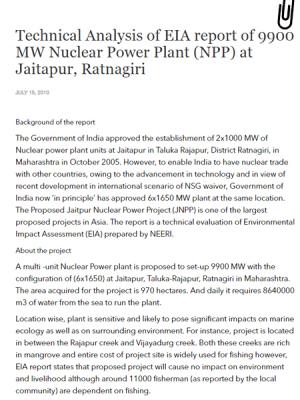